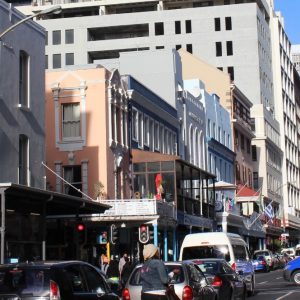 A pilot project to ease Cape Town’s homebound traffic in the afternoons will start in March.

The project to provide six traffic wardens across the CBD is a partnership between the City of Cape Town and Cape Town Central Improvement District (CCID) and will run until the end of June.

The six officers will be fully funded by the CCID and will be deployed at problem traffic intersections from 15:30 to deal with traffic out of town, explains CCID safety and security manager Muneeb Hendricks.

Before peak traffic, they will cover intersections where congestion happens during the day, such as the Strand and Adderley streets ­intersection.

“We will also be equipping these six wardens with our own body-worn video units – a first for wardens of this nature,” he says.

CCID CEO Tasso Evangelinos says traffic – particularly outgoing at the end of the day – in the city centre “has become an issue”.

“It can be extremely congested,” he explains. “Driver behaviour has also become such that gridlock across intersections regularly occurs and blocks traffic in both directions. Causing a gridlock is actually a bylaw offence for which a driver can be heavily fined, so we believe that these initiatives will go a long way to both alleviating congestion and modifying driver behaviour.”

JP Smith, Mayco member for safety and security and social services, says the pointsmen will keep cars from blocking an intersection and obstructing traffic.

“The idea is to have the intersection clear of obstructing cars to improve traffic flow, improve adherence of motorists and reduce the frustration of motorists. The CCID will be funding the project in terms of the City’s policy which allows external bodies to fund the employment of personnel.