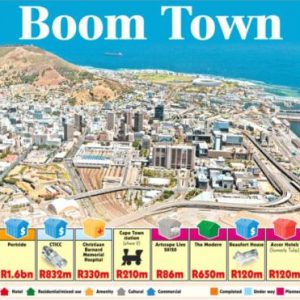 Cape Town – While the Cape Town city centre is well known to be “open for business”, it’s also becoming a sought-after home address.

Last year residential property worth R296.4 million was sold in the CBD.

“We firmly believe that the next wave of development – and indeed growth overall in the CBD – will be towards accommodating increasing residential demands.

“This will be from the need for more apartments – hopefully including more affordable purchasing and rental opportunities – to the provision of retail and other facilities to service the needs of this growing population,” said Rob Kane, chief executive of the Central City Improvement District.

According to the CCID’s third State of Cape Town Central City Report, based on online business, residential surveys as well as retail opinion surveys conducted last year, the city centre is gaining traction as a place to live and play, as well as work.

Andrew Fleming, CCID researcher and author of the report, said the findings showed that employees were becoming more picky about where they lived.

“The CBD offers a unique opportunity to live in a unique urban space.”

It also offers city workers a short commute, and access to public spaces and events such as the First Thursdays initiative where galleries and other venues stay open until late. Most of the people attending these events live in the city centre or city bowl, the study noted.

Fleming said the huge demand for residential space encouraged developers to seek innovative options, such as the conversion of vacant office space into residential units. The average rental for a one-bedroomed city flat last year was R12 889 a month, while a three-bedroomed unit went for at least R27 000.

Generated property rates in the CBD increased from R216m in 2012 to R254m last year.

Meanwhile, the report indicates that the property boom shows no sign of abating, with overall property investment in the CBD hitting the R24 billion mark.

The expansion of the Cape Town International Convention Centre and the new Christiaan Barnard Hospital will pump investment worth at least R2.1bn into the Foreshore over the next two years.

The CTICC 2 is being developed by the City of Cape Town with an investment of R832m, while Netcare is putting R330m into the construction of the state-of-the-art private hospital next door.

According to the report, there is still land available for development in this area. Because it has few heritage restrictions, having been reclaimed from the sea, this part of the city centre is becoming attractive to developers.

Developers are also taking advantage of the tax incentives associated with the older parts of the city, and several historical buildings are being upgraded.

Portside, with an investment of R1.6bn, became the city’s tallest building when it was completed last year.

Other projects under construction include The Towers on Hertzog Boulevard, with an investment of R498m, the R250m refurbishment of the Southern Cape Sun, and the R210m upgrade of Cape Town station.

The redevelopment of Artscape is being planned, and the project has already been allocated R45.6m by the national government and R14.3m by the Western Cape government. It will get a further R86m this financial year.

The old Tulip Hotel bordered by Buitengracht, Strand, Castle and Bree streets, was demolished this month to make way for a R120m mixed-use development for Accor Hotels. This will include hotel bedrooms, parking, retail, restaurants and meeting facilities.

An unconfirmed investment of R650m will turn 1 Dock Road – an entire city block between Bree, Hans Strijdom, Loop and Mechau streets – into a mixed-use commercial space with a hotel.

Also in the pipeline is the refurbishment of Beaufort House, at a cost of R120m, to accommodate an electricity depot for the city council.

For the first time, the State of the City report includes information about the city’s film and media sector, which contributes R3.5bn to the national economy.

The city centre attracted an average of 30 000 people a month to events and festivals, the report noted. Some of the larger events included the Design Indaba conference, which boasted more than 40 000 visitors to the international convention centre, and the Cape Town International Jazz Festival, which had 37 500 coming through the doors.

The convention centre hosted 535 events, including 33 international conferences, generating almost R3bn in revenue for the province.

While there’s been a slight decline in the number of businesses based in the city centre, business confidence remains buoyant. Nine out of 10 businesses said they were satisfied with their location and 82 percent said urban renewal had invigorated interest in the city as a business destination.

Ninety percent of the city’s A-grade office space is occupied, while overall office occupancy is at 86.6 percent.

Fleming said the power of the CCID’s trending data, captured in various surveys over the past three years, was invaluable. It could be used by investment decision-makers and interest groups wanting to track the growth of the CBD.

The full impact of the World Design Capital 2014 programme will be assessed in the 2015 report.