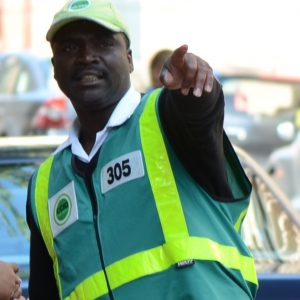 Tshepo Molaoele is a car guard based at the entrance to The Company’s Gardens and because of his honesty and quick-thinking, managed to stop a robbery and help with the arrests of the potential thieves.

The 27-year-old hero felt suspicious when he noticed some men in a Citi Golf circling the gardens and driving slowly past the cars parked in the road.

When the suspicious car stopped, Molaoele noticed one of the men was holding a screwdriver, he knew they would try to steal a car, so he approached the men and asked them what they were doing.

The would-be thieves offered Molaoele a R1000 bribe to keep quiet – a lot of money to someone who earns as little as R30 a day. Yet, Molaoele refused and suggested that the men come back later when there weren’t so many police around to see them.

The men took his advice and left. At this point, Molaoele ran to a nearby café and told the people there what had happened. The Central City Improvement District (CCID) was called and within minutes arrived on the scene.

With the help of the police, the CCID dressed up as guards and waited for the men to return, which they did. All four of the potential thieves were apprehended and Molaoele was taken to the police station to write a report.