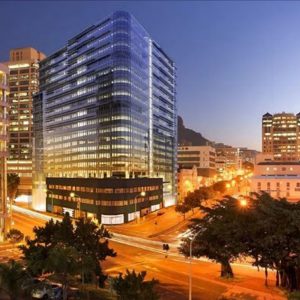 Cape Town – The skyline of Cape Town’s central business district is set to change dramatically in the next four to five years, with major property construction worth an estimated R16 billion under way, in the planning, or proposed.

The construction includes everything from major new hotels and high-rise apartment buildings to mixed-use developments and extensions of existing buildings.

According to the Cape Town Central City Improvement District (CCID), property worth some R4.6bn is under construction in the city centre.

Some of the biggest new projects include the R33 million Netcare Christiaan Barnard Memorial Hospital on DF Malan Street, and the R680m SunSquare and StayEasy Hotels, under construction on the city block bound by Buitengracht, Strand, Castle and Bree streets.

The estimated R1bn upgrade of the Radisson Blu Hotel and Residences on Riebeeck Street is set to be completed before the end of the year.

An R832m expansion of the Cape Town International Convention Centre, also due for completion in the next two months, will double the centre’s existing exhibition capacity by 10 000m².

Among the major property developments in the planning stages is The Modern (pictured above), a mixed-use space with a hotel which carries an estimated price tag of R650m.

The Modern will take up the city block bound by Bree, Hans Strydom, Loop and Mechau streets.

The Capetonian Hotel, meanwhile, on Pier Place, Heerengracht, is set to be upgraded by Raya Hotels at an estimated cost of R200m.

But it is proposed property developments that will most change the face of the city centre.

At 148m tall, the proposed Zero2ONE Tower, announced last week by FWJK architects, will dwarf the Portside Building by 9m.

The 42-storey skyscraper will boast 624 apartments, 760 parking bays and 6 000m² of retail space. It is set to be constructed on the site of Old Mutual’s Exchange Place on the corner of Adderley and Strand streets.

This week Marriott International, the world’s largest hotel group, announced plans for the construction of three new hotels in the city centre, in partnership with the Amdec Group.

“The significance of this announcement for both the City of Cape Town and for South Africa cannot be underestimated,” said Alex Kyriakidis, president and managing director for Marriott International in the Middle East and Africa.

“The developments in both Cape Town and Johannesburg (where two hotels will be built) confirm the country’s importance to the international travel market – for both the business and leisure traveller.”

James Wilson, chief executive of the Amdec Group, said the full Yacht Club development would cost R1.6bn, and was set to be completed before the end of 2018.

Amdec is also constructing two new hotels on the Foreshore, which will be run by Marriott International on 30-year leases. They are the five-star Marriott Hotel, with 200 rooms, and the 150-room Residence Inn by Marriott.

Wilson said he expected the three Cape Town hotels would create about 4 000 construction jobs in the city, and about 320 permanent hospitality jobs.

The two hotels on the Foreshore will be located in what is set to become the largest development in the Cape Town city centre in recent years – an R8bn Amdec development known as “Harbour Arch”.

Wilson said the development would be similar to Melrose Arch in Johannesburg. In addition to the two hotels, it will contain shops, motor dealerships, restaurants and accommodation across 200 000m² of space on a 5.8-hectare site.

Rob Kane, chairman of the Cape Town Central City Improvement District, noted that the property developments would forever change the face of the Foreshore.

“Three years ago, the Foreshore still had vast tracts of land being used for parking as well as a number of commercial buildings that had not seen refurbishment in a number of years,” said Kane.

“Along with these and the office blocks already rising in the area, the proposed new hotels will bring new economic and job opportunities.”

For the Foreshore itself, the developments would add vastly to the “softening” of what had until recently been a harsh edge of the CBD landscape.