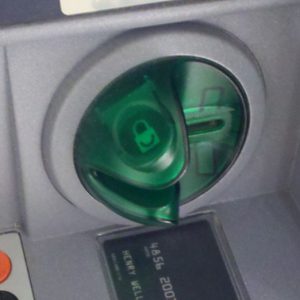 Cape Town – A collective effort by the Cape Town Central City Improvement District (CCID), South African Banking Risk Information Centre (Sabric), the police and the city council has seen a decrease in the number of people being robbed at ATMs.

However, fear that a syndicate is targeting customers at the cash machines continues to grow.

A number of people have been victims of robberies at ATMs, suspected to be the work of a syndicate, but there has been a drastic decrease in the number of attacks, thanks to the multi-pronged approach to tackling the crime in the CBD.

Two months ago, the CCID reported at least one person was robbed at an ATM every day in the CBD.

But on Thursday, CCID manager of safety and security Muneeb Hendricks said that statistic has been reduced to about two incidents a week.

“We have undertaken a great deal of training with our own CCID officers, as well as conducted extensive public awareness, particularly with shopkeepers and other stakeholders that sit in close proximity to ATMs,” Hendricks said.

In the past few months, a suspected syndicate had been targeting ATMs, paying particular attention to tourists making withdrawals. Last month, Sabric conducted a training seminar with CCID officers and law enforcement partners, including police and the city’s cyclops and CCTV unit, Hendricks said, adding neighbouring city improvement districts as well as representatives from the hospitality industry had also attended.

“We’ve also been liaising very closely with bank risk managers within our area, as well as the joint bank council to see how we can work together to alleviate ATM crimes, and are working with Sabric to produce educational information that can be distributed to visitors at relevant entry points into Cape Town, such as the airport and hotels.”

Meanwhile, Sea Point and Green Point neighbourhood watches have cautioned people to “be aware” when withdrawing money after a tourist was robbed of R6 000 at an ATM outside Shoprite in Sea Point.

On a crime update Facebook page, the neighbourhood watch wrote: “Please do be careful when taking out large sums of money from ATMs – preferably do so inside a bank and check if you are being watched. If you have overseas guests, please advise them accordingly.”

The post alleged the tourist was followed from the ATM and robbed near a fast food restaurant.

In response to the incident, Shoprite spokeswoman Serta van Wyk said the store had invested millions to beef up security for its customers.

“Regrettably crime cannot be foiled in all cases, and security staff cannot always prevent the theft of personal items.

“CCTV cameras do not always provide a guarantee that a perpetrator will be filmed in the act, or that they will be identified or caught. Security measures are regularly evaluated and adapted to fit a store’s requirements and, where necessary, additional plain clothes guards will be deployed.”

A Turkish woman, who is alleged to have been followed from an ATM and then pick-pocketed at in a store in the Waterfront, spoke to the Cape Argus about her experience.

The 64-year-old woman, who asked not to be named, said she was withdrawing cash at an ATM and noticed a suspicious security guard standing close to her.

She said she believed the man followed her into a store and pick-pocketed her.

She was robbed of R800, her bank card, cellphone and a leather business notebook.

“It was hardly 10 minutes that I had left the ATM and my money and belongings were gone.”

But V&A Waterfront spokeswoman Carla White said the security guard had merely assisted the woman who had forgotten her card in the ATM, and that the woman had acknowledged leaving her bag unattended at some point in the centre.

Chief executive at Sabric, Kaylani Pillay said ATM robberies were a concern in the Western Cape.

He said the syndicate used rental cars to get around the Licence Plate Recognition (LPR) cameras which have been installed in Green Point and Sea Point.

“If they used the same car too often the LPR cameras would flag them and that would mean them being followed or watched.”

Sea Point Community Policing Forum chairwoman Heather Tager said some of the hot spots in the suburb were the ATM on Glengariff Road and the bank branch nearby: “It is important that incidents are reported to SAPS. If incidents are not reported then we are not aware of such.”