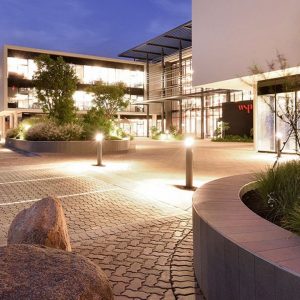 It’s a phrase that for nearly 100 years has been the global industry mantra and it’s as important today as when it first came into common usage.

One major difference in the current context, though, is how business has redefined the term “prime location”; position remains key, but green is the new watchword and combining the two elements is the winning formula when acquiring modern office space.

That win win of superlative position and sustainability prompted a major move for High Street Auctions (HSA) from Rosebank in Johannesburg to the 4 Star Green Star SA rated Knightsbridge Office Park in Bryanston.

Knightsbridge features a central urban park where buildings are placed within a dense urban forest that features running tracks and outdoor relaxations spaces.

According to Knightsbridge’s website, there are generators and a back up water supply. These are complemented by resource efficient state of the art mechanics and electrics including a chilled water system, lighting sensors and rainwater harvesting for irrigation.

Each building has a roof garden, entertainment spaces and various outdoor work areas.

“Numerous studies have shown that green buildings have a major influence on the health and well being of those who work in them.

“One such study we took into consideration was conducted by Harvard University in the past two years, and among the key findings were a 26% boost in staff cognition, 30% fewer sick days taken and a 6% improvement in employees’ sleep quality. Green buildings also boost staff engagement.”

According to Dorah Modise, CEO and an executive director of the Green Building Council South Africa, 61% of major building projects in SA are expected to be green this year, almost double the projected global average of 37%.