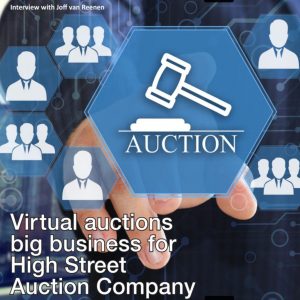 How comfortable would you be parting with millions of Rands, or even tens of millions, paying for a property on an online payment portal? After all, it’s more than a pair of shoes or a bag of groceries… Actually, the High Street Auction Company is finding that it can barely keep up with demand when it comes to providing an online bidding and payment service for its clients. Joff van Reenen, director and lead auctioneer at High Street, tells us more.

A good proportion of the properties auctioned by High Street are now sold online, to buyers from within South Africa as well from foreign countries. 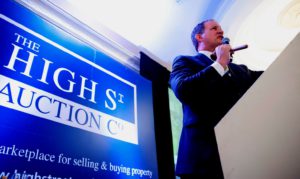 High Street live streams all of its auctions, enabling interested parties anywhere in the world to watch them and to bid either online or over the phone.

Successful bidders make their payments immediately via electronic funds transfer, which is secure thanks to encrypted WiFi.

It certainly appears that buyers are completely happy to use the online platform to bid and pay for properties.

In fact, two of the most expensive properties ever sold at auction in South Africa were sold online.

One was Kyalami Race Track, which went for R205 million in 2014, and the other was a Clifton mansion in Cape Town, which was sold in 2016 for R96 million.

“Our clients are totally comfortable using the technology, and spending this kind of money online or over the phone,” Joff comments.

At present, High Street Auction Company is the only auction house in South Africa which live streams all its auctions. Potential buyers watch from all over the world and some are even quite happy to sit five minutes away from the auction venue and watch the proceedings via live streaming.

Because of the huge role that technology plays in this process, High Street has moved away from the placing of traditional print advertisements in the newspapers to advertise auctions.

It now advertises on social media, and makes strategic use of Google Ads to ensure that its message reaches as many people as possible.

It’s certainly working, because plenty of properties have been sold to buyers who have seen them advertised on social media platforms.

The German buyer of The Castle in Knysna saw the property advertised on Facebook late in 2017, and bought it online as soon as it came up for auction.

“We have sold properties to buyers in America, the UK, Germany, Australia, New Zealand you name it,” says Joff. He adds that it’s not just overseas buyers who are watching the live streamed auctions.

Bidders across South Africa, from Cape Town to Komatipoort, from Soweto to Mitchell’s Plain, are getting on board with the idea.

On 12 September, High Street was hosting an auction at Cape Town and Johannesburg venues simultaneously, live streaming between the two, as well as to bidders in nine other towns across the country.

Getting people to be comfortable with using technology in this way is key to success here.

“If you have a strong brand and a good name in the industry, buyers will have the confidence to bid,” he says.

Joff likens it to buying a product online from a high end retailer one you know will exchange goods, process refunds and handle any queries with a degree of professionalism that engenders trust in customers.

Although High Street is the only auction company to be making use of technology to this extent in the auction space, Joff is confident that the company is on the right track with its strategy in this respect.

“The current president of the American Auctioneers Association, who is also a personal friend, told me recently that the auction business in America is better now than it has ever been, thanks to online auctions,” he says.

This is corroborated by other American auctioneers that he has spoken to recently. It stands to reason that if one is advertising via digital platforms, one’s reach is exponentially greater than it would be by means of a traditional print platform.

Instead of reaching a potential four million readers through a local newspaper, one can reach 50 or 100 million online.

This makes the process seamless for foreign buyers, as well as for local buyers who don’t want to miss an auction while they are out of town or overseas.

“It is interesting to see how many foreign buyers still have an appetite for South African property despite our political and economic turmoil,” Joff says.

He puts this down to the fact that these buyers are still getting real value for money when they buy South African property. “There is no doubt that going the online route has had a huge impact on our business, and it continues to do so. I don’t even think we have scratched the surface yet,” he comments.

That said, it isn’t an easy feat to run an online auction smoothly. “Conducting a real estate auction is a tricky thing to do under normal circumstances, so running a virtual auction is a very difficult undertaking,” he notes.

It requires massive processing power and bandwidth, a strong IT team, a top notch auctioneer, and a team behind the scenes that is completely on the ball.

“Everybody involved has to know exactly what they are doing. It may look simple but having a strong and capable team behind it is absolutely critical,” he adds.

In order for this to happen, High Street invests in constant training and upgrading, and it’s an ongoing process.

However, Joff believes that the effort and investment had paid handsome dividends.

“Our market share and the records we have are proof that we must be doing something right,” he says. “Most importantly, for us and for our buyers and sellers, it is a tremendously enjoyable process,” he adds.

Bidders are clearly happy, relaxed and confident about bidding online, buyers still get their money, and High Street has a reach and a market penetration that is growing all the time.

Asset Magazine is a media leader in trending property news