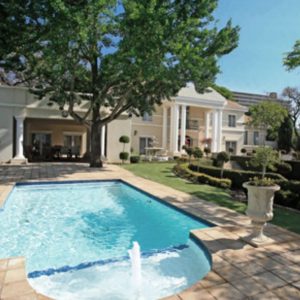 Much talked-about auction drawing near

Property valued at approximately R1bn is on High Street Auctions’ sales floor during the month of November, including the much-anticipated sale of the Tshwane Mayoral Residence and the land occupied by one of South Africa’s oldest operating gold mines.

This is setting the auctioneer up for breaking its all-time sale by volume record for the second time this year with the final auction for 2017 on November 23 when 60 lots will go under the hammer.

According to High Street director and lead auctioneer, Joff van Reenen, there are multiple noteworthy properties being auctioned off, including two retail centres and the land on which the Blaaubank Gold Mine is located.

However, the property that has attracted the most attention in the lead-up to the auction, to be held at Summer Place in Hyde Park, is the Mayoral Residence.

“This is the first time a city will be selling its mayor’s official residence, and significantly the proceeds will go towards the development of housing for the Tshwane community,” he said.

The City of Tshwane is the first major metro in South Africa to tighten its fiscal belt by auctioning the official Mayoral Residence that incumbent DA Mayor Solly Msimanga has declined to occupy. Proceeds of the sale of the five-bedroom mansion situated in the elite suburb of Muckleneuk will be used to build houses for dozens of needy families in the city.

Van Reenen confirmed that the property will be on show on Sunday the 19th for prospective buyers to view.