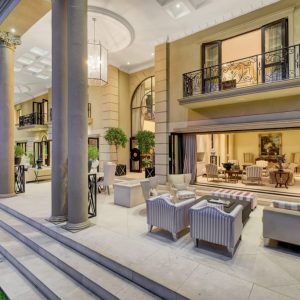 A sprawling manor house in Sandhurst in the north of Johannesburg, Villa Royale, was the most expensive residential property auctioned in South Africa last year.

Previously owned by Zimbabwean tycoon James Makamba, the mansion was sold at auction for R38.325 million by High Street Auctions, in November 2018.

“More than half a dozen interested parties pre-registered to bid on Villa Royale and initially bidding was fierce from all quarters, but eventually it boiled down to a war between two bidders,” said High Street Lead Auctioneer and director, Joff van Reenen.

“Bidding opened at a fairly staggering R25 million and went upwards from there very quickly.”

Villa Royale, which was run as an ultra-exclusive boutique hotel, was sold by way of an order of court at the final HSA auction of 2018 at Summer Place in Hyde Park on November 29.

“The double-storey manor has marble flooring throughout and the two levels are connected by elegant staircases. There’s also an elevator should you not want to walk,” van Reenen said.

“The manor boasts five luxury suites, immaculate landscaped grounds and lounge areas for formal and informal dining. The public rooms include a wine cellar, state of the art gym, 13-seater cinema with reclining leather armchairs, a cigar lounge, a spa and a games room.”

The  mansion is approximately 1,650 sqm in size set in expansive grounds of nearly 2,300m sqm.

According to a report released in 2018 by AfrAsia Bank and New World Wealth, of the 2,200 multi-dollar-millionaires in South Africa, 120 reside in Sandhurst.

The report noted that Sandhurst ties for third place in South Africa (with Clifton in Cape Town) for the number of “trophy homes” it boasts. Trophy homes are defined as costing more than R20 million and there are 110 such mansions in Sandhurst.

Villa Royale was on the market for over a year before the financial institution took control and ordered the bank-instructed auction.

Van Reenen said HSA has in the past year achieved numerous successes in the ultra-luxury residential market, particularly with homes that owners have not been able to sell through traditional broker avenues.

“Among those last year we also sold the castles at Noetzie that had been on the market for several years through traditional brokers. The sale price was R29.483 million. Another trophy property that lingered on the market for some time before being auctioned by High Street was an estate in Monterey Drive, Constantia, that went for R24.075 million.

“People from at least five countries registered to bid for the Coronation Road house; there was massive interest in the property,” van Reenen said.