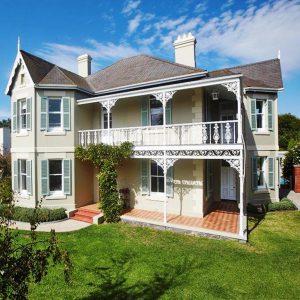 The leafy Cape Town suburb of Rondebosch is not only sought after for its convenient location and proximity to numerous amenities. Rondebosch is also renowned for its beautiful examples of Victorian, Edwardian and mock Tudor homes, which now fetch record prices when sympathetically restored.

This is according to Lesley Payne, Area Specialist for Lew Geffen Sotheby’s International Realty, who says late last year, a beautifully restored period house in Silwood Road achievedRondebosch’s highest price ever when it sold for R15.3 million. She says they also recently listed a similar property on this exclusive road for R14.95 million.

“Only three other properties in Rondebosch breached the R10 million mark in 2015, with the second highest sale price being R13.85 million in Aberdeen Road, followed by another home in Silwood Road which sold for R12.3 million.”

According to Payne, the Silwood Road area, flanked by Milner and Campground Roads, is regarded as the most sought after of the three nodes in Rondebosch and, often referred to as the Golden Mile, entry-level prices here start at around R5 million.

Payne says this pocket is not only home to many of the most impressive period homes in the area, which are typified by large, established gardens, but it’s also just a stone’s throw away from many top schools including Bishops, Micklefield, Rondebosch, Rustenburg and Oakhurst, which affect property values.

The Silver Mile is below Milner Road, with prices ranging between R3 million and R8 million, depending on the stand size, condition of the property and location, she says.

The third node in Rondebosch may be merely called the Village, but what it lacks in title, it makes up for in character and proximity to the Newlands Rugby and Cricket grounds. Prices here generally range between R2 million for an unrenovated Victorian cottage with no off-street parking to R5 million for a larger, more modern home.

Arnold Maritz, Southern Suburbs Co-Principal for Lew Geffen Sotheby’s International Realty, says the desirability of property in Rondebosch is evident when one looks at how quickly the market recovered from the economic crash in 2008.

Citing Lightstone data, Maritz says the market continued to strengthen steadily by around 9% per annum from R2.6 million in 2010 until 2013 when it surged with average house values showing a nominal year-on-year increase of 17% from R3.3 million to R4.5 million in 2015.

Measured during 2015, Maritz says a healthy percentage return on investment (%ROI) over five years was revealed to be an inflation-beating nominal of 11% per annum.

In fact, he says Lighstone data reveals that only 54% of the properties are freehold and, in terms of sales, 49% of all transactions since 2005 have been sectional title sales.

Geffen says the average apartment price increased from R1.16 million in 2010 to R1.646 million in 2015, which translates to a solid year-on-year compound growth of 7%.

However, he says the sectional title market in Rondebosch is almost independent of the housing market, in that, it generally appeals to a completely different demographic, offering accessible entry pricing in a sought-after upmarket suburb.

Geffen says another notable difference between the two markets segments is that most investors who buy freestanding family homes live in their properties, while the converse is true of apartments and smaller cottages in the village, where the majority of investors buy property to rent out, mainly to the mushrooming student and young professional market.

Claude McKirby, co-principal of Lew Geffen Sotheby’s International Realty in Cape Town’s Southern Suburbs, says although Rondebosch is renowned for its large family homes, part of its strong appeal is that it offers such a wide choice of property options.

He says few suburbs can boast the same variety and cater to such a broad spectrum of buyers. Young families and aspiring professionals just starting out, as well as pensioners scaling down, will find an array of compact apartments and quaint cottages to suit their pockets and needs. Wealthy, established professionals with families have their choice of elegant houses situated on large grounds.

Who lives in Rondebosch?

He says another factor driving property sales in Rondebosch is the growing influx of families moving to the Cape from other parts of South Africa, most of which want to be near good schools.

“This is evident when one looks at the length of property ownership in Rondebosch. Unsurprisingly, the majority of owners (51%) have lived in their homes for 11 years or more, but what has changed in recent years is that people who have owned their properties for less than five years now account for 25% of homeowners.”

According to Payne, Rondebosch is not only one of the oldest suburbs in Cape Town, it’s also where the first permanent title of land in South Africa was issued, and most of the current houses date back to the 19th century and early 20th century.

“Rondebosch was fortunate to have a millionaire landowner when the suburb first started to develop as a residential node in the late 1900s. Cecil John Rhodes saw the writing on the wall even then and secured many acres of land which he declared as open space for all.”

Payne says although much of the valley of the Liesbeek River has been built over and bisected by roads and the railway line, green spaces like the popular Rondebosch Common are still public land and well-utilised by residents.