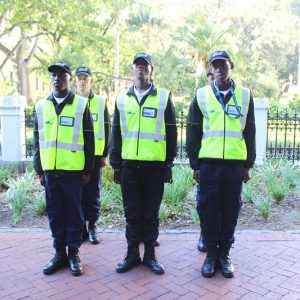 Cape Town – A busy corridor in the Company’s Garden, alongside Parliament, connects many students, workers and tourists to central Cape Town.

The tree-lined avenue, closed off to cars, is usually a tranquil commute for those on foot.

An occasional mugging is not however, unheard of with a man recently using the avenue to try and run away after snatching a chain off a woman at the nearby Iziko South African Museum.

Cape Town Central City Improvement District (CCID) officers apprehended the man. In a separate incident, the CCID also recently handed over a man to police for drug activity after spotting suspicious behaviour in the park.

As of last week, new safety kiosks stand at the entrance to the Garden.

Western Cape MEC Dan Plato said the kiosks would help keep both tourists and locals safe in and around the Garden.

The city was highly reliant on tourism and therefore this was a sector that needed to be “preciously protected”, he said while handing the kiosks over to the CCID.

“We want tourists to come and spend their money in Cape Town.”

“If people think they are safe, they will come. We want to make safe spaces even safer.”

This was largely thanks to partnerships between the SA Police Service, the CCID and the city’s metro police and law enforcement officers.

“There are very few cities in South Africa where you will feel safe walking around,” he said.

Crime in the central business district had decreased by 90% since the CCID started in 2000, according to its chief operating officer Tasso Evangelinos.”This is not an overnight success. We have been working very closely with law enforcement agencies.”

He said more than 240 security officers patrolled day and night.

Their single biggest challenge remained opportunistic crime, such as muggings and theft out of vehicles.

“We are very happy to say we do not have serious crimes in the CBD, like rapes or murders, touch wood.”