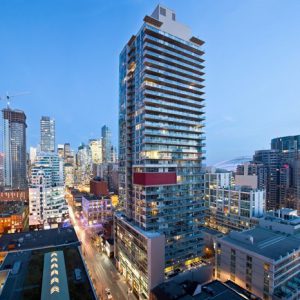 A massive 70% of the property business of the Toronto-based Lourantos Group of Sotheby’s International Realty in Canada, originates from South Africans.

That’s according to Christo Lourantos of Sotheby’s International Realty in the Greater Toronto area on the shores of Lake Ontario, who says that the value of the Rand to the Canadian Dollar relative to other First World currencies makes purchasing property there a viable option.

“There are a lot of skilled people emigrating from South Africa to Canada, while a substantial number of local investors are also using their annual Reserve Bank forex allowance to purchase property in a stable market that is growing at a rate substantially above inflation.

Toronto lawyer Laughlin Campbell, of Campbell Bader LLP, says there are no restrictions on ownership of Canadian real estate by South African nationals.

“The purchase, title transfer and insurance processes are very straightforward, with a modern, electronic land titles system providing ease of use and security.

“Non-residents investing in Canada are required to file with the Canada Revenue Agency with respect to capital gains on real estate, but the process is not complicated and easily integrated into the sale of investment property by any competent lawyer,” says Campbell.

“The process of obtaining a clearance certificate takes two to four weeks in most cases, usually within the time allotted for closing of an agreed purchase and sale. Capital gains are taxed at the top marginal rate, but only half of the gain is taxed, resulting in a favourable tax treatment compared to many other jurisdictions.”

According to Campbell investment properties and rental income are favourably treated in Canada in respect of taxation.

“Non-residents may opt to pay tax on the net income from a rental property, permitting the deduction in Canada from gross income of all allowable expenses associated with the property.

“Income from property in Canada, whether capital gains from the sale of a property or rental income, is also treated favourably under the Canada-South Africa Tax Treaty, preventing double taxation. The treaty was signed in 1997 and, generally speaking, any tax paid in Canada is deductible from tax owing in South Africa.”

Campbell says tax deferral and efficiency can be increased through the use of partnerships and holding companies, subject to director-residency requirements, which vary from province to province. In general, he believes that Canada is a much more welcoming and desirable place to invest, from a legal and accounting red-tape point of view, than the neighbouring USA.

Lourantos, who recently paid a visit to South Africa to meet with investor clients, says if one is considering buying property in Greater Toronto it’s a good idea to plan a trip and spend some time looking yourself, because unlike the local market, the average length of time a property remains on sale is a fortnight or less.

“Unless you intend to purchase sight unseen, which is generally not a good idea, the only way to find what you want is to be there when the property goes on the market.”

And unlike South Africa, in Canada both buyers and sellers are each represented by their own realtors, so as a potential investor it’s important to secure the services of a reputable agent before beginning to search for a property.

Lourantos says most of his investor clients are Johannesburg-based and they generally look at entry-level homes throughout the Greater Toronto Area as a first investment, which can range from condominiums to townhomes or semi-detached properties.

“The Toronto skyline has been a sea of cranes for some time now to meet demand for condos. You can enter this market for around $300 000 Canadian (about R3.3 million), which is well below the annual limit set by the South African Reserve Bank(SARB) for taking funds offshore, and townhomes just out the city start at around $400 000.”

According to the SARB, a taxpayer in good standing and over the age of 18 can invest up to R10 million in his or her name outside the Common Monetary Area (Lesotho, Swaziland and Namibia), per calendar year, but a Tax Clearance Certificate in respect of foreign investments must be obtained. An additional amount of up to R1 million within the single discretionary allowance facility can be transferred abroad annually without the need for a Tax Clearance Certificate.

According to the Toronto Real Estate Board, rental vacancies in the Greater Toronto Area are 1.9%, making this type of housing in high demand.

Jaques Du Preez, Principle Broker of Oakville based Mortgage Allies says compared to South Africa, Canadian mortgage rates are historically very low.  Both fixed and variable mortgage rates are currently below 3%.  By law, Canadian fixed rate mortgages are compounded semi-annually, not in advance and is repayable in blended, principal and interest payments.  The maximum amortization period for a conventional mortgage is 30 years and borrowers can choose a renewable term of between 1 to 10 years.

Foreign purchasers can qualify for mortgage financing in Canada, with a deposit that ranges between 35% and 50%, depending on which financial institution approves the mortgage loan.  Borrowers must also have additional closing costs of between 1.5% and 2.5% of the property price in a Canadian bank account.  Some mortgage lenders might also require liquid assets to be deposited in a Canadian bank account for a certain period of time prior to the closing date.  It is highly recommended that potential borrowers are pre-qualified prior to entering the property market in Canada

Lourantos: “Before putting down a deposit or applying for a mortgage, it’s important to transfer the funds for the purchase into a Canadian account.”

Toronto, the provincial capital of Ontario, is a large, ethnically diverse city sprawling along Lake Ontario’s north-western shore. A dynamic city with a core of skyscrapers, all dwarfed by the iconic CN Tower, it also features abundant green spaces including the oval of Queen’s Park and the 400-acre High Park,with its trails and sports facilities. The city has a population of less than three million.

Lourantos says from a residence point of view, Oakville is an upmarket section of the Toronto market which has a large South African community. Canada is one of the top five countries to which South Africans emigrate, most of them highly skilled and educated individuals or families.

“The average price for these clients entering the Oakville market is around $800 000 Canadian (about R8.8 million) for a detached four bedroom home with a garage.

“Freehold properties of this nature spend an average of two weeks on the market because there is such massive demand for housing in the area and South Africans like it, because the look, the feel, the stores and the facilities remind them of home.

Lew Geffen, Chairman of Lew Geffen Sotheby’s International Realty in South Africa, says Canada is still one of the few places where South Africans with Rands can make a meaningful property investment and get a decent return on their money.

“The market there is hot right now, and the exchange rate is not nearly as crippling as it is against the US dollar, Euro or Pound.

“Conversely we are also seeing numerous expats now resident in Canada, looking at the South African market for holiday homes because the exchange rate is so favourable and owning property here allows them a base to be close to extended family.

“The property relationship between Canada and South Africa is a two way street that is presently fairly heavily trafficked and we expect that to continue for the foreseeable future.”