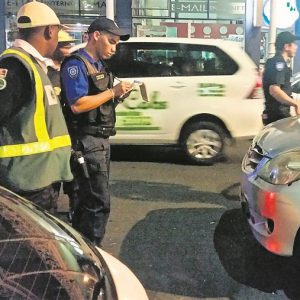 Dedicated Law Enforcement officers appointed last month across the CBD have already started proving their worth.

The officers started in the second week of December and will be on duty for a year. Ten officers are deployed across the entire CCID area, with eight officers dedicated to Long Street between Leeuwen and Buitensingel streets.

The officers will also work nights until April to “help manage the night-time economy and make it as safe as possible”, says Muneeb Hendricks, CCID safety and security manager. “This team has created a highly visible presence of law enforcement on the street and has given more substance to the work of our own CCID public safety officers. You could say these officers have given more bite to the bark of our own CCID officers as our guys have limited powers of arrest.”

The officers have the power to issue fines for both traffic and bylaw offences, conduct stop-and-searches and issue official compliance notices, says Hendricks.

“This joint team of Law Enforcement officers and CCID officers were thus able to take the bull by the horns and made a highly effective and collective impact on hotspots like Long Street. The members were also on duty during all major events in the CBD which included the minstrels marching and the New Year’s Eve celebrations.”

The officers have dealt with all the types of bylaw-related issues, Hendricks says.

“These include drinking in public, fighting, urinating in public, possession of dangerous weapons and drugs. Besides these bylaw transgressions, the officers also played a huge role in regulating motorist behaviour by enforcing non-moving violations such as double parking, parking on red lines and obstructions. This team played a huge role in managing the large numbers of permit-less informal traders who descended on the CBD hoping to make a quick buck at the expense of the regular, permitted, year-round informal traders.”