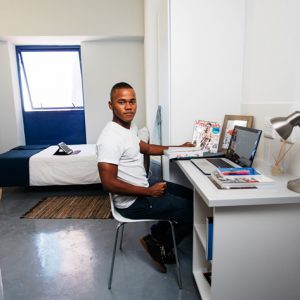 Students embarking on the 2017 academic year are biting their nails to the quick stressing about whether they’ll be assigned a bed in res, but getting turned down might just be a blessing in disguise.

And the solution isn’t necessarily an apartment either, because students are increasingly being squeezed out of decent, safe and affordable private accommodation in Cape Town as semigration pressure on the market forces rental prices to skyrocket out of the reach of most cash-strapped families.

Compounding the challenge for parents is the fact that one of the best-performing markets in recent years has been the Southern Suburbs, including the stretch known as the “academic belt” because of its proximity to the University of Cape Town (UCT).

Tina Malyon, Area Specialist for Lew Geffen Sotheby’s International Realty in the Mowbray and  Rosebank areas, says these suburbs were traditionally dominated by freehold properties, but sectional title developments have mushroomed in recent years in response to the burgeoning demand for student accommodation.

“Despite the new developments, though, we are experiencing stock shortages in this sector with accessibly priced sectional title units selling almost immediately when they do become available and property values and rentals are now at a premium.”

FNB’s House Price Index revealed a 7.4% year-on-year national growth rate for the month of June 2016, which was slightly higher than the 7.2% rate recorded for the previous month.

In contrast, the Western Cape enjoyed a 2016 second quarter year-on-year house price growth rate of 12.1%, which was up from the 12% recorded during the first quarter.

The higher property sale prices in the province and in Cape Town in particular, are directly reflected in the rental rates.

In Rosebank and Mowbray the monthly rental for a basic bachelor apartment starts at around R7 500, while a one bedroom flat for less than R9 000 a month is a very lucky find – and that’s before additional monthly expenses such as electricity and Wi-Fi have been included.

However, as only a third of the rapidly growing student population can now be accommodated at most campus residences, increasingly desperate parents are faced with the daunting challenge of finding suitable alternative accommodation in a very restricted market.

It is this demand for secure and affordable accommodation that is fueling an emergent trend in all the major metros in South Africa – private off-campus residences that tick all the boxes for both cash-strapped parents and their millennial progeny.

Among these new bespoke student developments in the country’s most expensive rental market, Cape Town, are 91 Loop, Student at Home, Student & Life and My Domain Student Living.

These purpose-built new-generation developments afford students the same sense of security and communal living as campus residences, but the modern facilities and conveniences they offer are a far cry from the very basic, often run-down shared accommodation of residences of yesteryear.

They not only afford students more independence and privacy, but also facilities with all the luxuries millenials could want including Wi-Fi, shuttles, security, laundries and trendy chill spaces.

Most establishments also provide or permit cooking facilities in their units, which means students can eat what they prefer rather than what’s dished up in a dining hall.

The concept was successfully initiated in Johannesburg more than a decade ago but, as the student housing accommodation crisis has deepened, similar developments have sprung up in the metros to meet the burgeoning need.

Until recently the new generation student accommodation in Cape Town was mostly CBD-based, but the launch of My Domain Student Living in the vibrant heart of Wynberg in 2015 now allows UCT students to be closer to campus while still being surrounded by a plethora of amenities including access to public transport and entertainment.

Giancarlo Lanfranchi, CEO Of Swish Property Group and owner and founder of My Domain says: “Millennial students have very different lifestyles and requirements to their predecessors; the world has changed considerably since the turn of the century so we have created living spaces to meet the unique needs of modern students, but at an affordable price point.

“Security is of course the primary factor and 24-hour manned security with access control is essential but another critical issue is ensuring reliable, free or low-cost Wi-Fi access that works throughout the building as this is a deal-breaker for most students.

Lanfranchi adds: “Millennials are also no longer willing to share bathrooms and to this end we have gone the extra mile. Our studios are fitted with bespoke modular bathroom pods that are not only functional but also funky, while bigger rooms have standard bathrooms.”

Angelo Lanfranchi, Operational Director and co-owner of My Domain says: “We have carefully considered the comfort of our residents, so although the law prescribes a minimum room size of 8m², our smallest room is a 14m² studio at R3 850 per month, with the largest of the four single studio options being the 25m² Deluxe Studio at a rental of R5 250. There is also a 25m² twin studio and a 50m² two bedroom unit.”

He says if parents consider the cost of renting a basic bachelor flat in Cape Town’s Southern Suburbs at nearly double the price with far fewer on-site amenities and no security guarantees, private student accommodation becomes a no-brainer.

“Each residential floor has an allocated break-away lounge where students can relax away from their books and there is also a large communal lounge and entertainment area with big screen TVs, foosball and pool tables.”

My Domain offers 5 Gigs of free Wi-Fi per month as well as a free shuttle service to campus and there is an on-site laundry and fully-equipped gym.

A Ministerial Review of Student Housing at Universities conducted in 2011 revealed the true scale of the student housing problem with projected bed shortages of 216 000 by 2016 and 400 000 by 2030 and it’s very clear that campuses will never meet this rampant demand.

Giancarlo Lanfranch concludes: “As escalating consumer inflation tightens its grip on shrinking family budgets and accommodation options dwindle, we believe that this innovative concept is the solution to tackling the growing student housing backlog whilst not financially crippling families.”