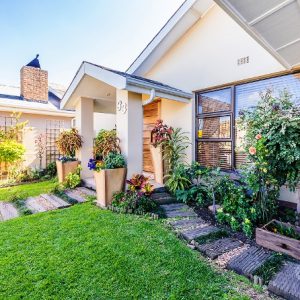 With Cape Town’s strident residential property market showing double-digit average annual inflation, there are few accessible options remaining for first-time buyers and young families – but investors seeking value as well as a good lifestyle still have a “window of opportunity” to find their dream home in Strand.

This is according to Chris Cilliers, CEO and Principal for Lew Geffen Sotheby’s International Realty in the Winelands, who says Strand was always the sleepy seaside village overshadowed by neighbouring Somerset West and bypassed on the way to Sir Lowry’s Pass, but this is no longer the case and the coastal town is now attracting considerable investor interest.

“Strand is one of the few places where it is still possible to invest in a family home or beachfront apartment at a fraction of the cost of most comparable areas in Cape Town, enabling young families, aspiring professionals and retirees to realise the dream of a relaxed oceanside lifestyle in a city where that usually comes at a premium price,” says Cilliers.

“Retirees looking to maximise their inflation-eroded pensions can buy a modern one bedroom apartment from around R400 000 or a secure two bedroom townhouse from R600 000, and for aspiring young professionals who seek the prestige of beachfront living, apartments with sweeping sea views  start at around R1.7 million.”

Cilliers says there are also several options for young families looking to get a foot in the market with cosy two bedroom starter houses priced between R1 million and R1.4 million, while the entry level for three and four bedroom houses is between R1.3 million and R1.5 million.

“The most sought-after freestanding homes at the top end of the market are in Greenways Golf Estate, where prices range between R5 million and R9 million depending on size and position,” says Cilliers.

Cilliers says while most property purchases in Strand are still ‘buy-to-live’, there has been a notable increase in the number of investment buyers. “This is always a good indication of a strengthening market in which investors are confident of achieving solid returns.”

Lew Geffen, Chairman of Lew Geffen Sotheby’s International Realty, believes that the town’s growing popularity with investors and the market’s upward trajectory will be further bolstered by the city’s beachfront upgrades that recently commenced.

“Transport for Cape Town, the City of Cape Town’s transport authority, has allocated a budget of around R103 million for the first phase to upgrade the kilometre stretch between the Strand Pavilion and Da Gama Street,” says Geffen.

“Work has also begun on the much-anticipated rehabilitation of the sea wall to protect Beach Road along the Strand beachfront from being windblown and regularly covered in sand, as well as to prevent the road’s frequent flooding during leap tides and storms.”

Geffen says this will significantly bolster trade along the beachfront, where businesses are currently regularly sandblasted and faced with reduced turnover when the sea laps at their doorsteps.

Included in the 12-year plan, he says, is the construction of a brand new pier that will stretch some 200m into the sea, the installation of new street lights and street furniture as well as the modernisation of Strand’s CBD to create a world-class coastal resort.

“The upgrades will have a significant influence on the broader Helderberg economy as well as further stimulate the residential property market,” says Geffen.

He says traditionally home to the 50-plus age group, the Strand area is becoming increasingly popular to a broad spectrum of buyers, with the number of investors under the age of 35 doubling during the past year.

“Strand is an attractive option for young families seeking a quieter life as excellent schools, hospitals, sporting facilities and top-class retail and entertainment amenities are all no further than a 15-minute drive,” says Cilliers.

“Residents are also only a 50-minute drive from Cape Town, 25 minutes from Cape Town International Airport and in close proximity to a multitude of attractions including the Winelands, the Whale Route and the world-renowned Kogelberg Biosphere.”