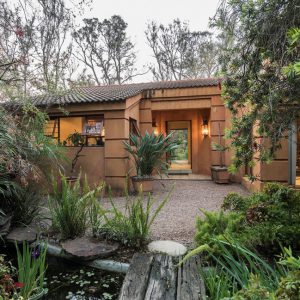 Rivonia is one of a handful of suburbs in South Africa which has proven largely resilient in the face of economic downturns and able to weather the storm with quiet and consistent endurance, largely because when people move into the area they tend to stay.

This is according to Di Jessiman, Area Specialist for Lew Geffen Sotheby’s International Realty, who says even during the 2008 credit crunch, the market here didn’t stagnate or backslide.

“And we still saw growth in property values, albeit at a lower margin,” she says.

According to Deeds Office records, Jessiman says in 2009 the average house price in the extensions was around R2 million, and up to R4.9 million in Rivonia and Edenberg.

“And, by the time most other markets started to recover in 2011, the median sale price in the extensions had risen by around 9%, while the Rivonia/Edenberg area achieved two record sales on large properties with business rights.”

Jessiman says that one of the main reasons that the market ticked along steadily over the years is the consistent but relatively low property turnover.

“Buyers have always regarded property in Rivonia as a long-term investment and desirable place to live and raise their families, with residents seldom moving out of the area when the time has come to upgrade or downscale.”

However, although its appeal hasn’t waned, Jessiman says Rivonia has transformed dramatically in recent years, and is no longer primarily a residential suburb known for its tranquil, countrified ambience and stately homes on generous erven.

Lew Geffen, Chairman of Lew Geffen Sotheby’s International Realty says as one of Johannesburg’s oldest suburbs, Rivonia has experienced several incarnations over the decades, from rural farmland to an exclusive equestrian residential area of smallholdings and, by the 1980s, it had become an exclusive suburban enclave.

“However, the turn of the century Rivonia saw the dawning of a new incarnation with the gradual introduction of a vibrant commercial component, the growth of which precipitated a dramatic change in the property landscape of this sought-after suburb.”

Geffen says that this transformation was inevitable given Rivonia’s central location in Johannesburg’s desirable north and its proximity to Sandton, and by 2007 the commercial market in the area was becoming very active.

“Suddenly existing office buildings in and around the Rivonia Boulevard were being sold and refurbished, with several new upmarket commercial developments being planned,” he says..

“The knock-on effect was a corresponding increase in demand for residential property in the area, with densification forever changing the face of Rivonia.”

Now regarded as one of the most popular and eclectic residential and business nodes in Johannesburg, the sought-after suburb no longer comprises only large freehold properties in quiet, leafy lanes, but is also home to a fast-growing number of upmarket sectional title and cluster developments, as well as thriving commercial areas.

The surge in demand for residential property and rapid growth of the suburb have also galvanised the once consistently steady sales market, and 2015 saw a significant jump in property values, with average house prices in some areas increasing by as much as 30% in a year.

According to Jessiman, the commercial growth and densification in Rivonia have also impacted the investor demographic and traditional buying patterns.

“With accessible sectional title entry prices of around R1 million, Rivonia is no longer the exclusive domain of the wealthy, and many of the new buyers are now young professionals and families with small children who move to be in the Rivonia Primary School’s catchment area,” says Jessiman.

“While the character of Rivonia may have done a complete 360 over the past decade, one thing that hasn’t changed is its desirability and appeal, and with top-class amenities on residents’ doorsteps, as well as easy access to main thoroughfares and the Gautrain, investors will continue to flock to the area.”