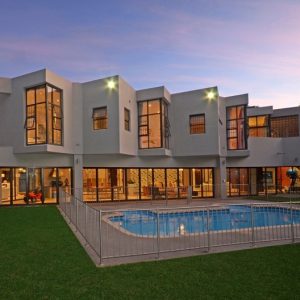 There are myriad factors which affect property values in an area, but in a metropolis the size of Johannesburg where intense densification has been the hallmark of the past 15 years, few create demand like proximity to a greenbelt.

Charlene Leibman. Area Specialist for Lew Geffen Sotheby’s International Realty in Senderwood, Bedford Park and St Andrews on the East Rand, says: “The property landscape in Johannesburg has completely changed since the turn of the century and, for the most part, it’s now a continuous urban sprawl with very few open spaces or vacant land.

“Because of this, we are increasingly finding that properties near outdoor recreational facilities tend to have a competitive edge in the marketplace over similar properties which don’t enjoy close proximity.”

Leibman says that an excellent example of the impact of this emergent trend was the redevelopment Huddle Park, which positively impacted the property market not only in Linksfield where the park is situated, but also in the adjacent suburbs of Senderwood, St Andrews, Bedford Park.

“The launch of Huddle Park Golf & Recreation in 2013 quite literally catapulted the area from its comfortable mid-market status to the top end of the market in line with northern Johannesburg suburbs like Hyde Park.

“In the past three years, we have seen a surge in demand for residential property, with many original homes snapped up for between R3m and R6m, only to be torn down and replaced with modern houses, some of which are valued as high as between R25m and R30m.”

According to Leibman, many of the larger stands are also being subdivided for small and exclusive cluster developments.

“However,” says Leibman,”while these suburbs have transformed considerably over the last three years to include many high end homes, there are still many accessible properties in the area for those who want to get a foot in this quickly growing market.

“It’s still possible to buy apartment for just over R1m up to around R3m, with the greatest demand at the moment being for flats below R1.5m. In the freehold market, starter homes can still be found for R2.8m to R3.5 and mid-level homes range from R5m to R15m.

Leibman adds that the houses that are most in demand are those below R5m and houses below R4m, which are becoming increasingly scarce, are sought-after by those who want to refurbish.

Smaller townhouses and sectional title units in St Andrews and Bedford Park sell for between R1.5m and R5m, depending on size, age and condition with clusters fetching between R4m and R8m.

For almost a decade, Huddle Park in Linksfield was a derelict and overgrown haven for criminals and regarded as a dangerous place to be avoided at all costs, which impacted negatively on the value and desirability of nearby homes.

All this changed when two local residents and businessmen, David Bagg and Gordon Brews, decided to get together and do something about the shocking state of the once-popular golf club of which Mike Kletz was a member in its heyday in the 1970s when Huddle Park twice hosted the SA PGA Championship. Kletz introduced the project to them, and now is a full time Professional Coach at Huddle.

Bagg says: “We both strongly believed this was an opportunity to rehabilitate a beautiful part of Joburg and revive what was once an iconic landmark and facility.

“After months of negotiations, the municipality finally gave us permission to lease 130 hectares of the property, while the remaining third was sold to a housing developer. However, while we were given was a 60 year lease, financing the project was for our account.”

And it seems their gamble and investment has paid off in spades, with the entire community reaping the rewards.

Says Leibman: “Since the redevelopment of the park, it’s a very different picture and property owners in the area are still talking about the incontrovertible difference it has made to their neighbourhoods and to their lifestyles.”

While Huddle Park Golf and Recreation is once again the only 18 hole public golf course in Gauteng, it is now much more than the golf club it used to be. It is very much a family recreational facility with myriad activities and facilities which include the 18 Hole Championship Blue Course , a floodlit driving range, a nine hole executive mashie course, restaurants and bars, a putt-putt course and a kids’ play area as well as catering and venue hire for functions.

There are also regular special events such as monthly fun runs, nature walks, markets and night golf and nature lovers enjoy the hiking trails and variety of birdlife which thrives at the parks wetland.

“They can also spur economic development in an area by attracting more home buyers, which in turn stimulates the retail and commercial component in the area.

Geffen adds that on a micro level, parks with excellent facilities also boost the local economy by attracting visitors from other areas to make use of the amenities.

Leibman says: “The area has always been in demand because of its proximity to OR Tambo airport, excellent retail and healthcare facilities and top private schools like King David, St Andrews Girls School and Saheti.

“However, with the redevelopment of Huddle Park, these suburbs now offer the full package, including a safer environment, sense of community and top class recreational facilities which cater for all needs and provide a safe venue for families to relax and play.”