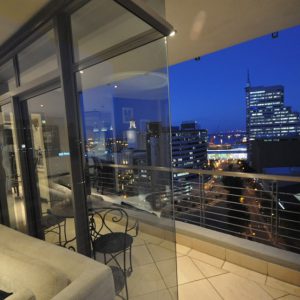 This is according to Brendan Miller, CEO of Lew Geffen Sotheby’s International Realty Atlantic Seaboard, who says most popular with investors are sectional title apartments, which promise solid returns, and many people are buying as a long-term investment.

Although, overall, apartments stayed on the market for an average of 109 days, 71.27% of those sold within 90 days, and most in under a month, demonstrating that well-priced residential units in the CBD continue to be snapped up.

Miller says an emerging trend in the area is the shift of investor owners toward short-term rentals rather than longer leases due to the exceptionally high return on investment.

He says the return on investment in these areas is higher than, for example, the Atlantic Seaboard, because property prices are lower, and year-round corporate demand for accommodation means owners aren’t dependent on the summer months to ensure occupation.

Miller attributes several key factors to the year-round occupancy levels of more than 70%, including proximity to major businesses and headquarters in the CBD and Waterfront, as well as the continuous host of popular events which take place in Cape Town.

He says not only is the Cape Town International Convention Centre (CTICC) a constant source of tenants for upmarket accommodation in the city, De Waterkant and Canals precincts, but there are also many regular attractions in town, as well as several major sports events like the Pick n Pay Cycle Tour and the Two Oceans Marathon.

“Occupancy is therefore almost year-round, and with the average daily rate of R1 300 for a two bedroom apartment in low season, and up to R2 700 in high season, you can see the value of this sort of investment.”

Although entry-level prices to the CBD area are around R1.2 million, Miller says these properties are rare.

Miller says properties in the next tier up, such as an A-Grade, one bedroom in a building like the Icon, are available for around R1.8 million, but they fly off the shelf. He says two bedroom units in good buildings generally start at around R2.5 million, and are also in great demand.

Miller says other positive advantages of short-term lets in the CBD area include the level of clientele it attracts, and regular maintenance inspections enable better upkeep of the property.

However, the days of just leaving your keys with a relative, friend or estate agent are long gone, and to optimise one’s investment and secure solid returns, Miller says reliable property management services are essential.

He says landlords are increasingly opting to partner with a skilled and credible rental agency that knows what is in demand, in which areas and at what price.

When choosing an agent, it is essential to look for one with experience in the rental market, knowledge of the area and especially one who will always put your interests first, he says.

Lew Geffen, Chairman of Lew Geffen Sotheby’s International Realty, advises investors who want to enter this market to look at the newer A-Grade buildings which offer 24-hour security, as well as other facilities, such as gyms and on-site restaurants.

“Having facilities at their fingertips means repeat business, especially from corporates, which has clearly been shown by the popularity of developments like Mandela Rhodes Place, the Icon, Harbour Bridge and The Adderley.”

One bedroom apartments have proven to be the most popular for corporate travellers, and Geffen says there is a simple formula for an excellent return in the CBD short-term rental market.