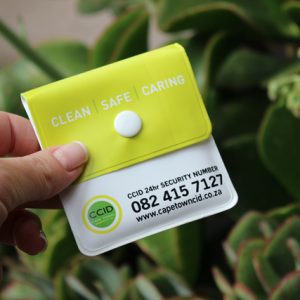 The people that keep a CBD clean 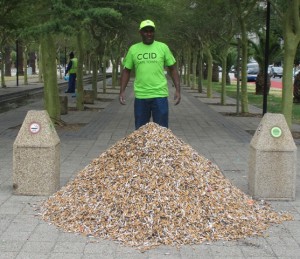 Straatwerk supervisor, James Mandean, with one month’s worth of cigarette butts collected from the CCID’s 270 cigarette bins in the CBD. The monthly average is around 142kg of butts – or close to 1 800kg per year

The Cape Town CBD is the cleanest “downtown” in South Africa, according to participants who take part in a number of surveys conducted annually by the Cape Town Central City Improvement District (CCID).

But it takes a great deal of manpower, numerous partnerships and enormous effort to achieve this, says Tasso Evangelinos, Chief Operation Officer of the CCID: “Alongside the City of Cape Town’s own waste management team who take care of the municipal and green bins across the CBD, the CCID’s five-person, full-time Urban Management team has an additional complement of literally hundreds of people who work day and night to sweep the pavements, and help to maintain our roads and curbsides.”

Mayoral Committee Member for Utility Services, Cllr Ernest Sonnenberg, agrees that these partnerships are vital: “The City applauds the efforts of the CCID team and is grateful for their assistance in keeping the Central City clean. Their work helps to create a space that residents can be proud of, and one that they are inclined to take better care of. This operation is a fine example of what can be achieved when different spheres of society work to make progress possible, together.”

The CCID’s other partners in keeping the CBD clean include its contractor J&M Cleaning who deploy 60 professionally skilled cleaners across 16 out of every 24 hour cycle. In addition, a 300-strong semi-skilled cleaning and maintenance team are deployed via the CCID’s NGO partner, Straatwerk.

Notes Evangelinos: “It often astonishes people when we tell them that members of our Straatwerk team who clean the 270 cigarette bins strategically placed across the CBD by the CCID, collect on average 142kg of butts each month – or close to 1 800kg per annum.

However, notes Lynn Oliver, Assistant Manager of the CCID’s Urban Management team: “That’s just the tip of the iceberg in terms of what we collect, clean and repair. We have three full-time precinct managers who walk the CBD daily and are our eyes and ears on the ground so that we can react quickly to anything that’s out of place – from illegal dumping on a street corner to a broken curbstone.”

Over the last recorded 12-month period, throughout the Cape Town CBD, the CCID:

The rodent baiting project is one of numerous special projects with which the CCID Urban Management team assists. Others include programmes that look at reducing illegal dumping and fining offenders (undertaken in conjunction with the City of Cape Town’s Solid Waste Management department), as well as programmes that make smokers aware of those tons of butts than can end up on the streets of the City when cigarettes are stumped out indiscriminately.

“To help combat this,” says Evangelinos, “each year in May the CCID distributes 35 000 pocket-sized, portable cigarette pouches. We’ll be doing a massive distribution of these pouches at major intersections and high-traffic public areas throughout the CBD from 25 to 29 May. We also distribute outside large corporate buildings where smokers traditionally gather.”

Handy enough to fit into a pocket, these pouches are mini fireproof ashtrays into which a smouldering cigarette can be safely stubbed out when no other ashtrays or cigarette bins are in sight. The pouches are also washable, making them more hygienic to carry and thus promoting their continued reuse.

Also during May, the CCID will be introducing the public, via social media, (Facebook and YouTube) to some of the people that keep the CBD’s streets and pavements clean each and every day.

Notes Oliver: “We’re hoping to create an awareness among Capetonians that every time they stomp out a cigarette on the pavement, or drop a piece of paper, there’s a human being – a person, not a machine – that comes along to clean up that mess. Our colleagues at J&M and Straatwerk are incredibly proud of what they do to keep the CBD clean, and we want to make people aware of who these people are and how much pride they take in their work.”

For more about the work of the CCID Urban Management team and to watch the YouTube videos search for “Cape Town CCID” on YouTube or Facebook.

17 thoughts on “The people that keep a CBD clean”