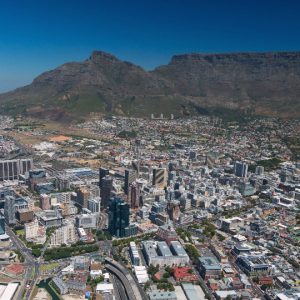 These are a project by the College of Cape Town in Buitenkant Street; a development by Telkom at its exchange on Lower Long Street; a redevelopment of Mike’s Sports on the corner of Bree, Strand and Waterkant Streets; a proposed mixed-use residential, retail and office development on the corner of Spin and Plein Streets; the proposed office tower by Ingenuity in Christiaan Barnard Street; the planned development at the Capetonian Hotel in Heerengracht; and the Gorgeous George Hotel and Bar development being constructed in St Georges Mall.

The CCID has published an annual investment guide for the past four years, tracking the growth of various business and leisure sectors, as well as the rise of geographical nodes in the central city.

Overall, property values in the CBD have increased substantially, according to CCID chair Rob Kane.

“By the end of 2015, when the latest report went to print, we estimated conservatively that another R8.2bn would be added to this figure over the next five years, with a total valuation close to R32bn by 2020 across 26 projects.”

The CCID does not yet know what the extra seven projects they became aware of since the latest report would add to the R32bn total valuation figure for 2020.

“But it does illustrate how intensively the CBD is changing – and across its entire footprint, from the Foreshore to the older part of the CBD,” said the report’s editor and co-author, Carola Koblitz.

She noted that back in 2012 the CCID’s first report recorded an investment value into the area of about R3.2bn, which at the time included the development of projects such as Portside, Touchstone House, 22 Bree, Atlantic Centre, the Civic Centre upgrade and the Cape Town International Convention Centre (CTICC) expansion.

“These developments added almost R4.6bn to our original 2012 figures, bringing the investment just into the Foreshore since 2012 to just under R8bn in that area alone.”

She pointed out that on top of that, the V&A Waterfront’s most recent developments are expanding towards the Foreshore, and there are a number of other developments happening within the harbour area to the north of the CTICC.

“What we are going to see is a very exciting reconnection of the CBD to the sea,” said Koblitz.

Bree Street has been identified as another node to watch, as it has moved towards becoming the CBD’s first true 24-hour economy. During the day there are retail and businesses in operation, while popular after-work and night time venues take over later.

“A substantial amount of residential and hotel accommodation – both existing as well as under construction – is happening on or in close proximity to this street,” said Koblitz.

Another large transformer of the economic landscape of the CBD, according to the CCID, is the rollout of the City’s own fibre-optic broadband network. R1.7bn is being spent by the City throughout the metro to connect its own buildings as well as those of the Western Cape government.

READ: Cape Town to connect fibre to all CBD buildings

To date 50 private buildings have already been connected and according to Tasso Evangelinos, chief operating officer of the CCID, it is estimated that by June 2021 about 1 000 CBD buildings will be connected.

Another interesting game changer in the CBD has been the rapid occupation over the past year of vacant commercial space, according to Koblitz.

“In the first quarter of 2014, this was sitting at an average of 14.4%. Portside had opened its doors as had Roggebaai Place, and other office complexes were waiting at the time to come on line,” she said.

“There were certainly high vacancy rates in Premium grade at the time, but C grade vacancies were also very high. However, by the final quarter of 2015, commercial vacancies had decreased dramatically to 10%, on average.”

Retail has also been faring well, with an overall occupancy rate during 2015 of 95%.

“We believe a lot of opportunity still exists in retail – from the growing daily office complement and the expanding night time economy, to the events and other opportunities that are bringing families into the after-hours market of the CBD, and of course, the growing residential component,” said Kane.