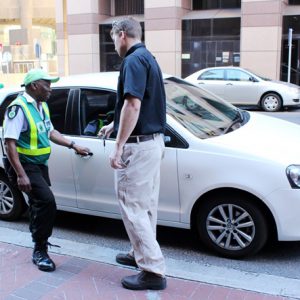 Muneeb Hendricks, safety and security manager of the Cape Town Central City Improvement District (CCID), says this method of breaking into vehicles is particularly concerning, “because most insurance companies will not pay out unless there is physical proof that a theft has occurred”.

Commenting on the video, Hendricks said: “One of the biggest problems with remote jamming is that it has made breaking into motor vehicles a simple daytime crime, whereas before if one had to break into a vehicle with force, it was mostly done under cover of darkness.

“During the day business people, especially, tend to carry more valuables in their vehicles such as laptops and tablets so the loss is that much greater.”

How does it work?

When a driver presses their remote to lock their vehicle, a thief close by will be repeatedly pressing a hidden remote device of their own. The signal overwhelms airwaves in the area and blocks the driver’s remote signal to the car.

Have you witnessed or been the victim of car-jamming? Email us and we’ll publish your experience on Wheels24.

Hendricks: “If you simply beep the remote while walking away and you don’t physically check that the vehicle is locked, there is a fair chance that it might in fact not be. It is imperative that you physically try to open the door yourself before you walk away.

“Otherwise, once the driver has walked away from the car, the thief then simply walks up, opens the door and helps himself to whatever valuables happen to be inside.

Unless someone happens to be paying particular notice to the driver who left the vehicle, the thief looks perfectly legitimate opening the door and entering.”

Four ways to guard against remote-jamming:
• Physically check that your vehicle is locked once even if you’ve locked it with a remote
• Keep valuables out of sight in the vehicle’s boot
• Stash your valuables before you park: place them in the boot before you start your journey, not once you arrive at your destination where someone may be watching
• If for some reason you are unable to lock your vehicle, rather park it in another location.

Working with the NPA

Hendricks says the CCID and other law enforcement partners within the City are in talks with the National Prosecuting Authority (NPA) to have remote jamming devices recognised as car break-in implements, which will make simply carrying them around a criminal offence.

“In the Central City all of our CCID Public Safety Officers (PSOs) are also specifically trained to notice as far as possible who climbs out of which vehicle, and to warn drivers to check their doors when they park.

“PSOs are also vigilant about people simply hanging around waiting for cars to park, and we have conducted awareness drives about remote jamming with pamphlet distributions.”

Hendricks advises that if you do fall victim to remote jamming, though, to follow through with more than just a police report and to ensure your vehicle is finger-printed.

Hendricks said: “That way when the culprit is caught, SAPS will be able to make the link and the person can be charged with multiple counts of breaking into motor vehicles, rather than just the one for which he happened to be caught.”

Watch the video and read more on Wheels24