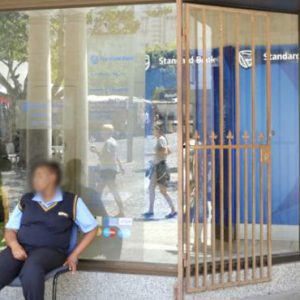 Cape Town – Every ATM is a potential crime hotspot, according the Cape Town Central City Improvement District (CCID). Last week, the Cape Argus was tipped off about card skimmers taking advantage of tourists at a popular ATM of one of the Big Four banks on Green Market Square.

“I went to the ATM to do some transactions. On getting there I noticed these two men who were nicely dressed.

“One of them offered to help the tourists whose card had been swallowed by the machine, and asking for their PIN.”

Aimes said when she realised what was going on she tried to alert the tourists, telling them not to divulge the PIN, but one of the men tried to distract her.

“The second guy was trying to get my attention away from what his partner was doing. I then went to the bank (branch) only to find it was still closed.

“After talking to a street vendor that operates opposite the bank, she told me the security guards work closely with those men.”

Another source who works for one of the Big Four told the Cape Argus that she was aware of the skimming taking place at the Standard Bank ATMs on Green Market Square and that it was well-known that card skimming syndicates often hit tourists there.

”The bank you are talking about has had security guards working with these guys for a long time,” she said.

The Cape Argus staked out the ATM and saw tourists having difficulty with the machine, and their card appeared to have been swallowed.

They were approached by a security guard who told them to visit the branch, but they refused to do so. They did not wish to comment.

Standard Bank’s spokeswoman Kate John said the bank would investigate any possible involvement the security guards could have in card skimming.

John said ATM users will always be potential targets for criminals, but by “arming yourself with the right information and by exercising extra caution in high-risk situations, you can protect yourself and your family from fraud during the holidays and all year round”.

“We urge customers about being vigilant and aware when making use of ATMs,” she said.

Police spokesman Captain FC van Wyk said his office could not provide any statistics on the number of ATM fraud cases currently under investigation as there was a moratorium on statistics.

The CCID’s communications manager Carola Koblitz said there is always a risk when using an ATM.

She said there was very little they could do to stem the tide of card skimming.

“We would, however advise any member of the public who sees this or suspects it is happening to immediately bring it to the attention of police or a bank’s emergency contact number.

“One of the most important pieces of advice we give is to ‘stash it, don’t flash it’ making people aware of the possibility that they could be scammed at an ATM.

“Always keep your PIN private, never allow anyone to stand too close to you to see what you are doing, and never engage in a conversation with anyone who wants to assist you or tries to distract you, no matter how well-spoken or well-dressed they may appear,” added Koblitz.

“If you feel at all unsafe or unsure in any way, rather walk away and find another ATM.”