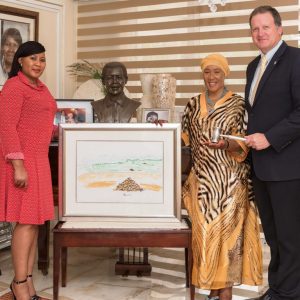 AS THE world celebrates 100 years since his birth, discussing the private moments with her father Rolihlahla Nelson Mandela, explaining his spirituality and humanity, and how he would have wanted his vision carried forward into the next century, isn’t easy for his eldest daughter, Dr Maki Mandela.

The head of the House of Mandela Family Foundation shares her late father’s memory with billions of people across the world who consider him part of their families because they were, in some way, touched by his passionate conviction that there is good in all of humanity.

The upside, to what is arguably the world’s largest extended family, though, is that with so many people being touched by “Madiba Magic”, says Dr Mandela. There is the growing awareness that collectively harnessing each individual’s contribution towards the greater good will make the world better in the long run.

Ensuring that Madiba’s legacy lives on has become Dr Mandela’s life’s work and her greatest passion, so it’s with astonishing tenderness that the formidable curator of his vision explains why she is auctioning several mementos that are extremely dear to her.

Among the items that will be auctioned by High Street Auctions’ Lead Auctioneer and Director Joff van Reenen at a gala event in Houghton to celebrate Mandela’s centenary on November 30 is one of only 22 original pastels ever drawn by Mandela.

Until now, all have been held by the family in a single poignant collection of memories spanning life in rural Qunu and the hardships he endured as a prisoner on Robben Island. There is also a rare life scale pewter cast of his right hand, as well as a one kilogram coin commemorating Mandela’s road to freedom. The coin has a neat off centre hole and in it lies encased a stone with a remarkable story.

The Forever Young Ball and Gala Dinner and auction will become an annual fund raiser for the charitable work that the Nobel Peace Laureate held most dear, says Dr Mandela.

The star of the auction is likely to be the only pastel sketch Mandela ever drew of the desolate limestone quarry on Robben Island where he and so many other prisoners spent backbreaking days crushing rock. Dr Mandela says letting go of this pastel won’t be easy.

“Tata created the Struggle Series in 2004. Those who know about the art works have always asked me the same question; why did he draw Robben Island?

“I think the answer lies in the number of years he spent there as a prisoner, and it was also the time when he missed Qunu the most.

“Qunu was very close to his heart. He loved it very much. It’s where he grew up.”

Dr Mandela explains that one of her father’s deepest regrets about the number of years he spent as a political prisoner was not the incarceration itself, but that he wasn’t there for his mother.

“It’s not surprising that among the pastels he sketched was his childhood home in Qunu. My dad was a mama’s boy,” she laughs affectionately. “He loved his mother very much.

“His major regret was that he wasn’t there to do the important things that a son does for a mother, like buy her a house or be there when she’s sick.

“But his love for Qunu never waned, and you can see it in his pastels.”

She says the pastel collection has been held complete in the family for 14 years, but the time is right to auction one to further her father’s vision.

“He would have been 100 years old this year, and I’m passionate about the philanthropic work we do as the House of Mandela Family Foundation to further his legacy; particularly our work around agriculture and food security.

“Agriculture is a way we can create wealth for our people, not only the rural population but as an opportunity for our youth, because the one thing we theoretically all do every day is eat. “It’s very much in line with my father’s legacy. Proceeds from this auction will go towards realising this dream for him and for our people.”

AND THE GOOD FARMER

Dr Mandela says something few know is that her father was a farmer.

“He had cows, chickens, a piggery and greenhouses with lots of vegetables like spinach and pumpkins and his farm supplied produce to the local village.

“In his will, it stated clearly that he wanted the farm to continue to provide for the village.”

Dr Mandela says it was on one of her return trips home, though, when she was standing at her father’s grave, that she realised more could be done.

“I thought oh my goodness Tata must be disappointed in his children for letting so much land lie fallow.

“Food security affects us all, and in line with that, we will be working after the auction to turn Tata’s farm at Qunu into a demonstration farm with an agricultural Centre of Excellence.”

Dr Mandela says the demonstration farm is the immediate plan, but long term is a more spiritual mission closely bound to her father’s life path. “What we did as family when Tata decided where he was going to lie was make a beautiful space for him.

“Eventually his burial site will be reached via the Walk to Freedom and our dream is that it will become a place of pilgrimage for anyone who is struggling with issues of freedom; personal freedom, community freedom or even national freedom.

“Pilgrims will be able to walk their personal journey while they walk Tata’s spiritual one.”

Dr Mandela says creating a place of remembrance of this nature is fundamental to her father’s legacy.

Madiba’s final resting place is integral to another item being auctioned; the one kilogram coin encased in 24 carat gold that commemorates his journey from prison to the Union Buildings. The innocuous looking piece of sandstone set in a hole in the coin is an object lesson in African tenacity that Dr Mandela holds very dear because it came from deep in the earth where her father now rests.

She explains that “deep”, in this instance, refers to significantly further down than a standard burial site, because the place her father chose to be buried on a hill overlooking his farm proved curiously reluctant initially to yield to the family’s attempts at peaceful re-interment of her brothers and sister.

“In our culture, a person should not be buried alone. So when Tata wanted to be buried on a hill on his farm, rather than in the family burial ground on the other side of the property, we decided to move the graves of my three siblings so Tata would be surrounded by family.

“When we tried to dig though, we realised it was impossible because the hill was sandstone. 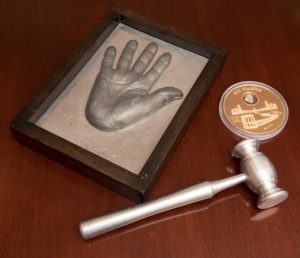 “In the end, we had to dynamite the whole place and excavate as well. It was the only way we could prepare the new burial ground!”

Dr Mandela says it was a difficult period because the family knew Madiba’s time was near, but it was standing in the blast zone exactly where her father would eventually be laid to rest that she picked up one small rock.

“The stone came from the very spot where Tata now lies, which is why it’s meaningful because it’s like being touched by his spirit.”

Dr Mandela says when she received the coin she asked to have the rock set into it, and the single relic from deep in the hillside where he’s buried has been there ever since.

Another family treasure and definite auction highlight will be the pewter cast of Mandela’s open right hand. A set of hands cast in gold was sold earlier this year in Canada for ten million dollars. The Forever Young Ball and Gala Dinner and auction at Madiba’s residence in Houghton on November 30, forms part of the official Mandela 100 program.

Dr Mandela says the For ever Young Ball and Gala dinner will have a twofold purpose; to celebrate and pay tribute to her father’s legacy, as well as via the auction on the night raise funds for charity. Partners include the House of Mandela Family Foundation, the Enhle Cares Foundation, the Africa Rising Foundation, the Nozala Trust, World Food Program, Lounge Around and Global Citizen.

Van Reenen notes that fundraising on the night will comprise a silent auction, Mandela’s Moment of Giving and a live auction.

“I doubt we’ll ever again see such personal items from the Struggle icon coming to the block, certainly not a collection of this nature endorsed and authenticated by the Mandela family,” Van Reenen concludes.

For inquiries about reservations email Diana@foreveryoungball.com