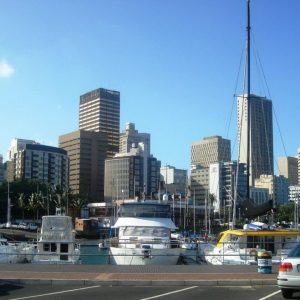 The value of commercial and industrial property in cities that are securely entrenched in their national economies by clearly defined and pervasive primary functions is likely to show more resilience in challenging economic conditions.

This according to James Dall, Joint Managing Director of South Africa’s leading specialist property sales house High Street Auctions, who says Johannesburg and the KwaZulu-Natal region around Durban are prime examples of local economies that have demonstrated relative stability in nonresidential real estate prices in the past two years.

“Durban is arguably Africa’s busiest cargo port. Some 4 500 vessels dock in the harbour annually and thousands of containers stream off the berthed ships every month to destinations across Southern Africa,” says Dall, who is also a qualified civil engineer. “Being such a critical container port that dispatches goods worth more than $45 billion a year, it unquestionably plays a key role in the country’s economy.

“Johannesburg, also known as the City of Gold, likewise started with a specific role of extracting vast mineral resources, at the same time transforming itself into the financial capital of southern Africa.”

According to Lightstone, commercial transactions to the value of some R127 billion took place across the country last year, with Gauteng claiming the lion’s share. And for investment buyers, according to the Rode Report, the commercial rental market during the first quarter of this year was led by Cape Town with growth of 7% in decentralised suburbs, closely followed by Durban at 6%. The report noted that industrial rentals were on par across Johannesburg, Durban and Cape Town, though, showing a nominal year-on-year growth rate of around 4%.

Dall says the perception doing the rounds among investors that there is a blanket surplus of commercial property in South Africa’s key nodes is precisely that — perception.

Know where to buy

“It’s all about quality and location in the current market, especially in Johannesburg. If you’re well situated on or adjacent to main arterials, close to public transport links and retail options are in the immediate vicinity, Prime and A Grade buildings will command a premium,” he says.

Dall cites the example of six blocks of executive business suites in the leafy, secure Tuscany Office Park in Rivonia that were sold by High Street in June.

“Tuscany is just a stone’s throw from the Ni and the Rivonia Road Interchange. The strongly-tenanted Sections 5 to 10 went under the hammer as Property Fund-listed individual auction lots, but were eventually snapped up by a single buyer for a collective R74.55 million.

“Commercial development sites and buildings around Umhlanga are selling just as well, because this is one of the fastest developing areas in KZN and property is at a premium.”

Dall concedes there is some pressure on the commercial market across the board away from prime locations as a result of sustained macroeconomic stress, “which makes it that much more important for prospective buyers to do thorough due diligence before jumping in the deep end, because investment properties have to fulfil a specific purpose”.

He says light industrial properties located close to major roadways both in Gauteng and KZN are also performing extremely well, driven by demand for regional distribution centres from online retailers, but heavy industrial property is taking more strain. Looking ahead Dall has some final words of advice for potential investors looking at the long game: “The primary status of these two cities is unlikely to change over the next decade, but long term commercial investors need to shift mindsets slightly and begin their searches with two words; location and technology.

“In the next eight to 10 years the property landscape will change drastically to include the value of data as Millennials grow up, assume management positions and move companies into the age of the Internet of Things (IoT) and finally the Internet of Everything.

“Prospective investors should set their sights on properties they can upgrade, modernise and mechanise in the next few years, and location will become more important from the point of view of being on standardised transport network routes.

“A recent study by Cisco estimated that by 2025 the IoT will have a potential global economic impact of $11.1 trillion a year. South Africa may be a little behind more infrastructurally developed First World countries, but our cities — especially those as important as Johannesburg and Durban — will have to advance to compete in the market and remain competitive, and from a property perspective you’ll want to be in the right place at the time.”

HOW TECHNOLOGY CAN HELP REALTORS

The modern technological age has revolutionized the Real Estate industry by providing nearly unlimited information to home-buyers. 20 years ago, a prospective home-buyer would have spent the majority of their time with a real estate agent going through information that is now readily available on the Internet.

Home buyers and realtors can utilize technology to be much more scientific in their quest for the perfect match.

MySoldMate launched in Arizona in the US in May 2016 and is the only real estate app to connect home buyers and sellers to their ideal real estate agent using compatibility testing. Through MySoldMate.com, buyers and sellers complete a personality assessment and are instantly matched to the best agent for their unique needs. If it can work for online dating, it can work for something as personal and life changing as buying or selling a home.

Aside from the app, realtors can turn to social media marketing, as well. For example, an agent can create videos that show him working with clients on projects that appeal to all different sectors of home-buyers: a buyer wanting a fixer upper or a buyer wanting a move-in ready home and sellers.

Using these videos for Facebook ads is a cost-effective way to get in front of buyers and sellers without being overly invasive. The web has resulted in information overload for home buyers, and finding the right real estate agent can help both buyers and sellers weed through the information to find what’s most important in the client’s decision-making process. (Sidebar Source: Realestatenews)