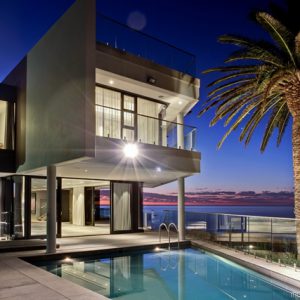 The Glen side of Camps Bay has always been the most sought after part of this exclusive Atlantic Seaboard suburb, consistently achieving the highest sale prices because of its proximity to Clifton and the Camps Bay strip as well as its enviable wind-free position.

This is corroborated by a recent Lightstone report which revealed that Glen Road is the second most valuable street in South Africa. However, the Twelve Apostles side of Camps Bay which overlooks Bakoven has become increasingly popular and prices are now nudging the suburb’s record transactions.

A recent sale by Brendan Miller, Lew Geffen Sotheby’s International Realty Atlantic Seaboard CEO, achieved not only the highest Rand per square metre on the Apostles side of Camps Bay but also the highest sale price by an agent.

The 854.4m² state-of-the-art home sold for R47 million including vat at R55 009 per m², which is superseded by only two other sales in the area; one on Glen Beach and another in Bakoven. A third property, the Enigma estate, was sold privately earlier this year for an undisclosed amount after being on the market for R99m.

Miller says: “Camps Bay remains popular despite the overall slowing in the economy and housing market as it offers investors a wide choice in properties with its 60/40 mix of freehold and sectional title homes.

“The suburb also has an advantage over its immediate neighbours in that most of the houses are set on sizeable stands.

“What is notable is that much of the recent activity in the market has been driven by younger investors under the age of 35,” adds Miller.

“This is in line with the marked increase in first time buyer activity in South Africa in recent years, particularly within commuting distance of cities, as the young professional demographic has expanded.”

“Investment in Camps Bay has always been lucrative, which is borne out by the fact that properties across all price bands have recorded on average a healthy nominal percentage return on investment of 16% per annum over eight years.

“And five years ago only around 10% of all freehold house sales were above the R10m price mark, while almost 40% of recent sales fall into this price band.

Miller says that Camps Bay also has a dynamic rental market with both long-term rentals and short-term lets commanding some of the highest rates in the country.

However, while Cape Town’s luxury housing market has been on the up for over a decade, high-end properties in the Mother City are still cheap by international comparison, according to a recent report by Wealth-x and Sotheby’s International Realty, “Europe, Middle-East and Africa Luxury Residential Real Estate 2015”.

The weak Rand continues to attract foreign investors to areas like the Atlantic Seaboard as comparative luxury properties in sought-after areas were at least twice as expensive, with some even up to nine times more expensive.

The report’s authors calculated their luxury real estate rankings by comparing the price per square foot of properties valued at more than $1 million (R12m) and Cape Town was found to have the lowest average price per square foot, and the lowest average listing price for such properties, making it an extremely affordable and attractive investment prospect for international investors.