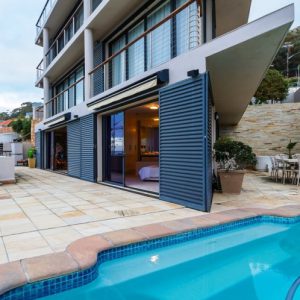 During the past year, South Africa’s strongest property market has begun to yield to the relentless pressure of the economic decline, with the average house price growth in Cape Town slowing steadily since the first quarter of 2016 when a 10 year high of 15.7% was recorded.

Lew Geffen, chairman of Lew Geffen Sotheby’s International Realty, says that although year-on-year growth has dropped by almost 2% to 13.8% at the end of the second quarter this year, the market remains strong, especially in the two most expensive sub-regions in the city: the Atlantic Seaboard and the City Bowl.

“FNB’s City of Cape Town Sub-Region House Price Indices for the first quarter of 2017 has revealed that these have retained their pole positions despite mild price growth slowing,” says Geffen.

“On the Atlantic Seaboard the average house price inflation rate barely moderated with a drop of only 0.2% from a multi-year high of 30.1% during the same period. The City Bowl market has fared almost as well, dropping only 1.6% from its 22.7% year-on-year high during the second quarter of 2016 to 21.1% recorded at the end of the second quarter this year.”

“We would expect a near-term slowing in price growth in the City Bowl and Atlantic Seaboard, after major affordability deteriorations, and with some signs of foreign buyer interest in South Africa weakening mildly,” says John Loos, household and property sector strategist at FNB Home Loans.

“But housing markets can gain a momentum of their own, with investors and buyers becoming enthusiastic about an area merely due to the recent rampant price growth in that region.”

Miller adds that this is a good indicator that property in the City Bowl and Atlantic suburbs are remain solid investments, and buyers are well aware of this.

“It’s important to bear in mind that both areas consist of several individual suburbs, offering a wide range of properties, from studio apartments and one and two and three bedroom flats to luxury penthouses and freestanding houses within broad price ranges,” he says.

“Overall, however, the property market in the Atlantic Seaboard suburbs – from Green Point to Bakoven, including Mouille Point – is still very strong and enthusiastic buyers are very much in evidence.”

Miller says the City Bowl picture is similar, with a wide variety of properties options in suburbs from Woodstock, Salt River and Zonnebloem to Tamboerskloof, Oranjezicht and Higgovale, as well as Gardens and Vredehoek.

“This means home buyers can be sure that property in the Cape Town City Bowl and Atlantic Seaboard suburbs will be good investments for years to come.”