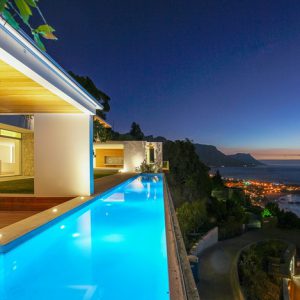 This is according to Joff van Reenen, Director and Lead Auctioneer for The High Street Auction Company who in the same sale auctioned off 31 lots of property from Clifton to Ballito to the Magaliesberg, with a total value of more than R500 million.

Van Reenen says the previous residential record bid was on a house in Sandhurst, Johannesburg, which was for R54 million. The residential crown adds yet another feather to Van Reenen’s cap; he also holds the record for the highest bid on a single property ever achieved in South Africa when he knocked down the former Kyalami Grand Prix racetrack for R205 million in 2014.

Van Reenen says after an accelerated marketing campaign in conjunction with Lew Geffen Sotheby’s International Realty, the bank-instructed Clifton sale of the Nettleton Ridge house provoked “live responses” from 29 countries, with more than 5 000 views of the house on their company website prior to the sale.

“This is just counting the serious viewers,” explains the auctioneer, “people who spent several minutes on the web page or downloaded the full prospectus. General views were in the hundreds of thousands.

“The hammer fell at R90 million, *(but the instructing bank and the buyer agreed to a final purchase price of R96m).

“Bank representatives attended the main auction in Johannesburg and are satisfied that it was conducted with all the legal compliance requirements met. The auction is non-suspensive, which means that the buyer will either pay cash or have a pre-approved bond.”

Van Reenen says Thursday’s auction of the Clifton house to a certain extent corrected the market in the area: “The house was previously for sale for R150 million and not even buyers with high value foreign currency to spend were prepared to consider that price.

“If you market your property at the correct asking price for the area and the current market conditions you will find a buyer, as this auction has just demonstrated.”

Van Reenen says it’s interesting to note that a local Clifton resident made the highest bid. “It’s someone who lives in Clifton and wants to stay there, so the property will remain in South African hands.”

Lew Geffen, Chairman of Lew Geffen Sotheby’s International Realty that jointly marketed the Clifton mansion, says he’s not in the least surprised by the quick sale.

“We’ve seen this time and time again that when a trophy home finally comes onto the market as a bank-instructed sale it will always attract the right buyer at the right price because it corrects the market.

“Mark Thatcher’s house in Cape Town was sold under similar circumstances and an auction is an outstanding way to ensure a quick, effective and market-related result.”

**Geffen says the top bidder was Clare Wiese, daughter of Christo Wiese, who has been a long-time Clifton resident. Clare and her husband bid telephonically from the house in Clifton, where the auction was being live-streamed from Johannesburg. Others also followed the auction on The High Street Company’s newly launched app.

“After an age on the market with no movement, two world-class brands in the form of The High Street Auction Company and Lew Geffen Sotheby’s International Realty pooled their immense marketing and selling skills and in one day achieved for the instructing bank what the seller had previously been unable to do with all the time in the world, because his asking price was simply too high for the market.

“We now have serious, committed buyers and that’s all that counts in the end.”

Van Reenen says this sale proves that only the right sort of properties are auctionable, and while auctioneers and realtors generally view each other as natural enemies, under the right circumstance well-aligned companies can work devastatingly well together and get the right result.

*Information updated since the auction

**Information updated since the auction