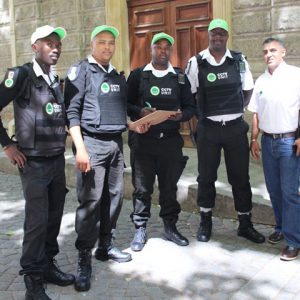 Soon there will be nowhere to hide from the law in central Cape Town as patrolling public safety officers are being equipped with body-worn video cameras that can see and record in the dark.

Cape Town’s Central City Improvement District (CCID) is rolling the cameras out after a six-month pilot project in which nine of the officers used the equipment.

The sight of cameras used in the pilot study de-escalated potentially violent situations‚ prevented crime and ensured both members of the public and patrolling officers were on their best behaviour.

Muneeb Hendricks‚ CCID Safety and Security Manager‚ said the cameras were “cutting edge technology for law enforcement services globally and their aim‚ in a nutshell‚ is to keep everyone on the side of the law‚ honest and well-behaved. It’s about both behaviour modification and accountability.

“The … cameras are as effective at improving service delivery by our public safety officers as they are at reducing public crime and violence levels in areas where they are deployed‚ because everybody’s actions are recorded‚” he said.

Hendricks said that 75 of the cameras had been purchased – enough to cover a full shift rotation.

They feature infrared recording capabilities‚ laser guides to show where the cameras are pointing‚ the ability to record video‚ sound and rapid multiple still images.

“Cameras are most effective as an immediate behaviour modification tool. If people know they’re being recorded‚ they’re unlikely to escalate to violence in a potentially volatile situation. This applies to both the public and the officers themselves‚” said Hendricks.

“They are also extremely effective in targeting specific types of crime‚ both covertly and overtly.

“From a covert crime prevention point of view if you know‚ for instance‚ that drug dealing is happening in a certain area‚ officers can record from a distance and with the footage we can compile an evidence dossier.

“Overtly‚ we deploy the BWV officers in the hotspot and the drug dealers will leave because they won’t want to conduct business in full view of a video camera‚ the footage of which can be used in evidence by our law enforcement partners at the City and the South African Police.”

Tasso Evangelinos‚ Chief Operating Officer of the CCID‚ said that a Digital Evidence Management System was also acquired to store camera footage and preserve the chain of evidence.

“This system allows us to securely store‚ manage and export digital footage as required‚” said Evangelinos‚ “and only the administrator of the system can delete footage‚ not the user‚ so if the user has misbehaved on duty‚ that person cannot delete the footage.”

The system uses encryption software so that if a file is copied‚ it cannot be viewed on another system.