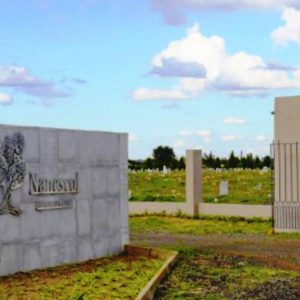 Dying for a career change? Hammer & Gavel has the answer!

If you are dying for a career change, High Street Auctions has not one, but two lucrative private cemeteries going under the hammer on November 1, just as the Halloween ghouls are settling back into their crypts for another year.

One sale catalogue highlight is located in Vanderbijl Park; a 20-hectare, 30 000-plot cemetery which is also zoned for 60 000 reburials. The Nanescol Private Cemetery is already an actively trading enterprise and comes complete with offices, a guard house, public toilets, warehouse storage and some 500 hitherto interred souls.

But prospective buyers needn’t worry about revenue shortfalls from the space occupied by these “residents” because private cemeteries charge premium rates for burial plots.

Private cemeteries’ rates vary considerably but a reasonable working budget, according to SAFuneralPlan.com, is around R12 000 per plot. According to the website, in regions across the country where municipal cemeteries are nearing or have reached capacity, prices can rise to around R30 000 for a prime site on private burial land.

High Street Auctions (HSA) Lead Auctioneer and Director Joff van Reenen says a simple calculation demonstrates the potential return on investment if you’re not squeamish about ge ing into a business that many would associate with B-grade horror movies.

“We’ll be asking for bids starting at R5 million on this lot, but in theory if all the plots are eventually sold for a measly R10 000 each and there are no price increases (yeah right!) in the next decade, the enterprise that owns this private cemetery will over the next few years see gross earnings ap- proaching R300 million on the 29 500 plots that remain vacant.

“Factor in general inflation, the scarcity of municipal burial land, South Africa’s aging population and comparatively high general mortality rate, and any person or entity that owns a private cemetery will literally make a killing financially, that is!”

Van Reenen says even if the hammer was to fall somewhere around R10m on this lot, it would still be cheap at the price considering the potential gross income over the lifespan of the site, which is directly adjacent to the area’s municipal cemetery.

He notes that while private cemeteries are usually in the hands of corporates, they also make ideal family businesses because there are several facets of the operation that need close attention.

“It’s a perfect set-up for more empathetic (and delicate!) family members to work in the office and help bereaved relatives through the process, while those with more robust dispositions can be hands-on with the incoming ‘residents’ destined to be interred in the cemetery.

“Many successful SMMEs nowadays are family-run businesses and considering the amount of interest in the auction lot – which we believe is only the second cemetery ever to be auctioned in South Africa the highest bidder on the day will be making a business investment that’s a dead cert to deliver high returns.”

The other resting place that will go under the hammer shortly a er noon on November 1, is the 8.5-hectare (unoccupied!) cemetery in Winterveld AH that Van Reenen knocked down for just over R5 million in June.

The unique sale made headlines across the country and there has been substantial interest in the business since the auction, so it returns to the sale block “and the owner is hoping to turn a profit now that businesses are so much more aware of just how lucrative the Grim Reaper’s work can be”, remarks Van Reenen.

Less than half the size of the Nanescol site, this cemetery for which the City of Tshwane has already granted all the planning permits for 12 500 plots is ready to welcome its first residents.

“If one applies the same simple arithmetic to this cemetery as to Nanescol, the new owner’s gross earnings by the time the land is fully occupied will be substantial; well north of R100m.”

Van Reenen says while funeral homes and private cemeteries were traditionally family enterprises, by far the majority nowadays are owned and run by big business because of their exceptionally high return on investment.

“We’re expecting several large corporates to compete for these lots when they come up for sale next month. This may seem like a grave business but there are perks, especially during tough economic times as this industry is pretty recession-proof.”

The next High Street Auction will take place on November 1 at Summer Place, 69 Melville Road, Hyde Park, starting at noon.
Telephone bidding for interested buyers outside Gauteng on the day can also be arranged prior to the auction.

For more information call HSA on 011 684 2707 or visit www.highstreetauctions.com