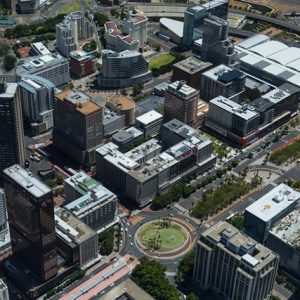 Cape Town – There was no magic wand that saved Cape Town’s CBD from a downward spiral of increasing crime and grime, Tasso Evangelinos, chief operating officer of the Cape Town Central City Improvement District (CCID) said at the organisation’s AGM on Monday evening.

The CCID was founded 15 years ago by local property owners concerned by the deterioration of the CBD, which saw property values decline and businesses relocating elsewhere.

These property owners had a vision for the Cape Town CBD to once again become a safe and clean environment commercial and social environment.

A “city improvement district” (CID) is a public-private partnership within a specific geographical area, approved by the city council in terms of relevant legislation to provide complementary top-up services.

According to Evangelinos the Cape Town CBD has seen official property valuations rise from just over R6bn in 2006 to close to R24bn in 2015, with at least another R7bn worth to be added to the CBD, for example once current construction is completed on the Cape Town International Convention Centre (CTICC) expansion and the new Christiaan Barnard Memorial Hospital.

In line with the aim to make the CBD not just a commercial hub, but also a place where people live or come to enjoy themselves, residential numbers in the CBD have grown from just 750 residents over a decade ago to well over 7 000 currently.

Over the course of the past financial year the CCID’s safety and security unit, for example, conducted 118 714 crime prevention initiatives, made 1 798 arrests together with its law enforcement partners, assisted with medical and rescue callouts 1 146 times, assisted at the scene of 754 motor-vehicle accidents and rendered public assistance on 1 257 occasions.

The unit has grown from an original 100 community police officers to 230 public safety officers deployed today.

The urban management unit, for example, cleaned 19 792 municipal drains and replaced 270 drain covers, removed 22 974kg of waste to landfill, removed 3 911 incidents of graffiti and emptied 1 538kg of butts from the CCID’s 279 cigarette bins.

It also cleaned 9 012 storm water drains and channels, which Evangelinos pointed out is particularly important to ensure that the CBD “does not encounter the same sort of flooding that occurs traditionally throughout the city in our winter months”.

Although the original aim was to address crime and cleanliness in the city, the CCID soon realised that a third aspect – social development – had to be addressed too.

During the financial year its social development unit helped 155 adults to shelters, assisted 67 children and youth as well as four mothers with children, transported 41 people home for potential family reunification, donated 400 pairs of shoes, 2 200 care bags and 300 Christmas gifts to partner NGOs for distribution and facilitated “hundreds of thousands of rands” in donations from CBD corporate partners and stakeholders.

As for future plans, Evangelinos said, together with the City of Cape Town, the CCID has begun to research the most viable models to optimise public space management in the CBD, in terms of infrastructure and beautification.

“We are also jointly looking at improvements to the spatial challenges that exist along certain routes in the CBD. These are routes where pedestrians, informal and formal trading wrestle for space resulting in all three being compromised,” he explained.

“Enhancing the flow throughout the CBD is a critical element for us, as we all work towards a central city that prioritises non-motorised transport, pedestrianisation and universal access, invigorating our streets and sidewalks with the most essential element: people.”

A sustainable, public-private lighting strategy is also on the cards to better illuminate public spaces at night and to find innovative solutions to lighting up buildings at night.

The CCID and its partners are also looking at the concept of broadband rollout in the CBD. This would see City-owned fibre connected from the street into private buildings.

“Likewise we are looking at initiatives to enhance security while at the same time supporting job creation,” he said.

The creation of community vegetable gardens in currently unused areas on the periphery of the CBD is another project investigated.