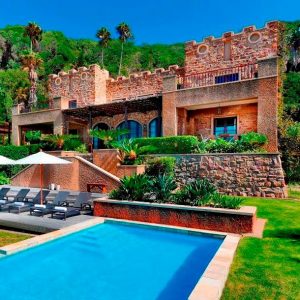 Three of Noetzie’s “fairytale castles”, nestled on the shoreline of the Noetzie Beach near Knysna on the Garden Route, have been sold to an international buyer by High Street Auctions.

They were sold for a total of R28.5m, including all furniture.

The new owner, a German national, wishes to remain anonymous.

Noetzie’s Pezula Castle is situated in its own private garden with the sand of Noetzie beach just a few metres away. The residence has a heated pool, huge terraces with panoramic views of the ocean, and a gymnasium.

Beach Castle is described as a romantic hideaway, while Cliff Castle is set against the rock face above Pezula Castle and boasts panoramic views of the beach and ocean.

High Street’s lead auctioneer and director, Joff van Reenen, says final details of the sale were negotiated after the March multi-property auction, when the castles first went under the hammer.

“The international buyer initially approached us at the auction with an offer that was presented to the seller. After some vigorous negotiation the parties agreed on the sale price. The necessary guarantees have now been met and the sale is through,” said Van Reenen.

The Noetzie castle was a retreat away from public eyes for the late former president Nelson Mandela and his wife Graça Machel for a few weeks at one time.

It was chosen as best international property judged on location, architecture, design, appearance and finish. Details of safety, security, energy efficiency and innovation were also taken into account.