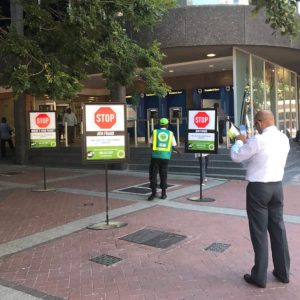 Cape Town, June 2017 – ATM scammers are getting more and more sophisticated in their attempt to con unsuspecting tourists, particularly as messaging to educate and warn both residents and visitors alike about ATM fraud is starting to reach its target audiences, according to the Cape Town Central City Improvement District (CCID).

This has emerged via a task force specifically constituted by the Western Cape Government to investigate the province’s increasing prevalence of ATM fraud, and which is using the Cape Town Central City as a pilot site to formulate best practice strategies to roll out across the city, province and beyond to the rest of South Africa.

These strategies include how to devise effective educational awareness campaigns in venues frequented by tourists and drafting tone- and message-accurate information that hotel front desk staff should convey to guests who are checking in.

Muneeb Hendricks, CCID Safety and Security Department Manager and a member of the task force, has revealed that one of the latest scams involves convincing tourists they need a special street parking permit for hire cars that can only be obtained from specific ATMS.

Explains Hendricks: “We have found that, because fewer visitors appear to be using ATMs in public areas, the conmen are in turn devising new distraction techniques to draw people back to where they can conduct their scams.

“One of the latest scams we’ve come across is the ‘special’ parking permits or even permits to walk down a street where a film shoot is happening, to lure unsuspecting visitors to the ATMs these conmen know are not being as heavily monitored by security as other cash dispensers in the area.”

He also noted that the CCID was on average called to the scene of approximately 10 incidents of ATM fraud in the Central City each week.

Says Hendricks: “The CCID’s security department was able to disrupt ATM fraud behaviour very effectively in the Central City during the most recent festive season with a campaign we ran on the ground around ATMs using signage warning the public in no uncertain terms that they could be targeted by scammers at any time. We also developed effective, one-page A5 brochures that our public safety officers distributed on the streets, and which we supplied to hotels in the Central City at no charge.”

CCID CEO Tasso Evangelinos says the campaign proved to be so effective that this material, including notes on the disruption campaign, was now considered by the organisation to be “open source” for the rest of the task force members to use.

“This means that the legal and law enforcement entities, tourism and hospitality industries can have access to the material for their own purposes, including customising the brochures and posters we have designed with their own logos and branding. Organisations need only contact our office and the materials will be sent in open source files for use by each entity’s own design and communications teams.”

The task force was set up earlier this year at the behest of Minister Alan Winde of the Provincial Department of Economic Development and Tourism and is being led by Andrew Boraine of the Western Cape Economic Development Forum. Along with the CCID, other members include SAPS, the City of Cape Town’s law enforcement division, the Provincial Department of Community Safety, Cape Town Tourism and representatives from the hospitality industry, banking fraud investigators and the National Prosecuting Authority.