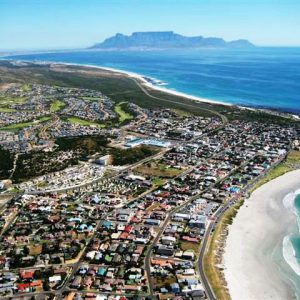 Cape Town’s Western Seaboard housing market from Milnerton to Melkbosstrand has shown remarkable average return on investment (ROI) of around 24% at the top end of the market above R5 million, followed by 18% in the price band between R 2.5m and R5m, both over the past seven years.

These are some of the results of an in-depth property survey undertaken by Lew Geffen Sotheby’s International Realty of one of Cape Town’s most desirable residential lifestyle destinations that offers something for everyone in terms of real estate – from starter apartments to luxury oceanside security golf estates.

Says Company Chairman Lew Geffen, who along with Atlantic Seaboard Franchise CEO Brendan Miller has recently also taken over the Western Seaboard: “This market without a doubt represents the most stimulating and varied in Cape Town at present. Nowhere else in Cape Town do you find such a diversity of residential choices, this affordable and this close to the sea.

“It’s a unique market filled with new developments and it’s expanding by the day. From a realty perspective it doesn’t get more exciting than that.”

“Based on these figures, affordability is a major key factor for prospective purchasers on the Western Seaboard,” says Geffen.

He says 2 375 houses were sold in 2007 to the value of just over R3bn with the average house price at R1.265m. “It’s very clear that this area was a major part of the boom that happened across the Peninsula,” says Geffen.

The following year, 2008, saw the worldwide credit crunch and the housing market bottomed out, with only 1 250 houses sold on the Western Seaboard worth R1.623bn. The average price was just slightly higher at R1.298m.

Brendan Miller, the new CEO of Lew Geffen Sotheby’s International Realty on the Western Seaboard, says the market has many points working in its favour.

Key among these is the fact that it offers affordable prices to everyone, has a wide spectrum of choice to buy or to rent, it boasts the most affordable security estates in Cape Town and finally, the most iconic views of Cape Town can be captured from its beaches.

“The property market on the Western Seaboard is mainly driven by single title ownership (houses), but sectional title ownership is also high in demand and increasing steadily.

He says that from a real estate perspective the Western Seaboard is the only area left in Cape Town that has vast tracts of open development land.

“The market is ripe for considered, well-planned residential development because the country has a rapidly expanding middle-class and a substantial shortage of housing stock.

“We plan to work closely with developers in those fast-growing suburbs and bring the force of our national marketing team to the table to create an even greater appetite for the area and for Cape Town as a residential lifestyle choice.”

Miller says one of the most exciting aspects of working on the Western Seaboard is the varied market.

“You have housing for everyone,” he says. “For starter families you can still buy a two bedroom sectional title unit for less than R500 000 in Parklands, but you can go upmarket right on the seafront in Atlantic Beach or Sunset Beach for up to R10 million.

“The average house price improved by more than 25% from R1.265m in 2007 to R1.635m in 2014 and it is fair to say that favourable lending rates and a fairly stable economy in the past couple of years have contributed to the increase in house prices.”

Geffen says analysing the sales figures of 2014 year-to-date (1 527 house sales registered at the Deeds office worth RR2.495bn), the top end price band from R5 million to R10 million showed a lot more movement than in previous years – even before the credit crunch.

At the top of the area popularity list last year in the R5m+ price band comes Sunset Links Golf Estate which achieved the highest average value at R7.195m, followed by Big Bay at R7.080m, Bloubergstrand at R7.040m, Atlantic Beach Golf Estate at R6.8m, Sunset Beach at R6.19m and West Beach at R5.59m.

The average in the region for mid-range properties (between R2.5m and R5m) was around R3.45m, according to Geffen, but the largest movement was in the lower end of the market between R1m and R2.5m.

“Properties sold for an average of R1.445m in this price band but it definitely varies per area, with Parklands, for instance, being generally more affordable than Blouberg.”

“The Western Seaboard offer buyers a wide choice in the upmarket, middle and middle to lower end apartments at affordable prices with exceptional positions and large living spaces. Buyers can expect prices to range between R8 000 and R30 000 per square metre depending the location, type of finishes and condition of the apartment or sectional title unit.

“Apartment blocks in the upper end of the market also offer a wide range of choice in the same development, depending on position, views and size. For instance, popular blocks such as Dolphin Beach (Table View), Ocean View (Table View) and Eden on the Bay (Big Bay) offer buyers units from around R1.5m to R5m,” says Miller.

“In general, the widest choice and sales of apartments, and most popular buys, are in the R1m to R5m price band.”

Geffen says many people who purchases houses and sectional title units on the Western Seaboard do so because there is such a lucrative rental market in the area.

“There are excellent schools, the beachfront lifestyle is second to none and with the MyCiti bus route making the commute to town one of the easiest and fastest in Cape Town, it’s a no-brainer that people want to rent there.

“The market on this side of Cape Town is generally long-term rentals, and depending on the property type and location houses can vary between R15 000 and R35 000 a month. Apartment rentals are generally between R5 000 and R15 000 a month, but there are obviously exceptions that will cost more.”

Geffen says whichever way you slice it, the Western Seaboard is a good location to invest in property.

“Whether you live there or you’re looking for a solid investment that will pay long term dividends in terms of ROI while still delivering on monthly rentals, the Western Seaboard presents solid value for money across all price brackets.”