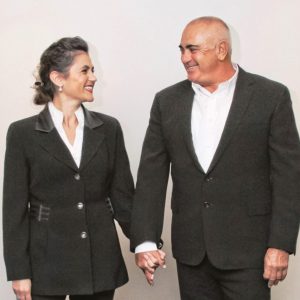 How to become a family business powerhouse: the Geffens dish the secret on All4Women

While it’s been the norm for generations to see ‘& Son’ on the sign above the door, nowadays it’s just as likely to be daughters who enter the family business. But being ‘Daddy’s Little Girl’ at home doesn’t necessarily translate to being ‘Heir Apparent’ at work, presenting unique interpersonal challenges.

The key – especially for daughters who are usually more adept at maintaining harmony within the family than in the family business – lies in mastering the fine art of balancing the separate parts of your life, learning how to have ‘feminine stones’ and making your mark in the workplace alongside your dynamic parent.

Yael Geffen, Creative Executive Director of Lew Geffen Sotheby’s International Realty, and daughter of the property mogul whose name is on the masthead, has worked with her father for several years. She says this has taught her invaluable lessons in forging a successful and rewarding paternal partnership, but it wasn’t always plain sailing and certainly not without a few hiccups along the way.

“Initially, the biggest challenge I faced was setting boundaries between work and home, especially when I found myself becoming so passionate about the business and the industry.”

The manner in which you communicate is also important, because what’s suitable family banter isn’t necessarily the right method of communication at the office.

“I had to learn a new, more diplomatic language in the workplace and say things like: ‘Have you ever thought of doing it this way?’ rather than speak in our usual, more forthright personal style.”

What to call him?

Yael says an important thing for daughters stepping into a business role to consider is what to call their fathers during office hours, because it can have a significant impact on their workplace dynamic and how they’re viewed by colleagues. What worked best for her was to stop using the name ‘Dad’ in the office.

“A big change was getting used to calling my father ‘Lew’, but I do revert to ‘Dad’ when we’re alone – or in heated moments.”

Yael’s grandmother, Aida, was the doyen of the property industry in South Africa and her son Lew followed in her footsteps. The dynasty now continues in Yael, although that was never the original plan, as is often the case with daughters becoming part of a family enterprise.

“I never wanted to join the family business and fought it for a long time. After graduation I travelled abroad, intending to stay for six months, but my short hiatus became a six-year sojourn during which I lived and worked in New York and Los Angeles.

“After a year my father phoned and said: ‘Lassie, come home’, but I wasn’t ready, because I felt I still had so much to learn.”

When Yael did finally return to join the family business it was with a wealth of experience garnered in high-powered US advertising and marketing firms, but she was still expected to start at the bottom as an apprentice.

She advises children starting in a family business not to have the expectation of walking in as the boss, because you lose valuable learning opportunities for yourself and you forever taint your colleagues’ perceptions of your abilities – no matter how accomplished you may be.

When you’re starting out, slow and steady wins the race

“My late brother Barak had already been with the company for several years and was always referred to as the ‘Heir Apparent’. So when I started working with him and people asked who I was, my stock reply was always: ‘I’m the Heir Not-So-Apparent’.”

But it was her father who took her under his wing. “He called me the ‘Apprentice’, and my standard rebuttal was always ‘I hope I don’t get fired!’.”

The key to maintaining their relationship – and any one in which fathers and daughters work together – is a foundation of mutual respect and honesty.

“Without that,” says Yael, “resentment builds up on either side. You have to respect the knowledge that the generation ahead of you brings, and they need to recognise what young blood can do for a business in a modern tech-savvy consumer environment.”

Yael says that once she’d proven her ‘chops’, her father was receptive to her opinions and ideas “and now often jokes with me that I’m his boss, because I’m so bossy. It means the world that he has such confidence in me and that I’ve earned the trust and respect of the man who continues to inspire me on a daily basis.”

Yael admits that although she and Lew are polar opposites in their approach, with her impulsive, artistic nature being the flip side of his more considered consistency, these differences are complementary because ultimately they share the same vision in business.

“And that’s very important to remember, because there are dynamics in a family stretching far beyond the workplace. But when you’re in the office, as different as you may be, if you share a vision for how you want the business to grow you can usually overcome most personality differences.”

What is apparent is that there are other qualities this father and daughter team share. Both are down to earth and firmly believe that those who work for the company are part of a family, rather than employees of a business.

Yael says some of her best moments at work have been watching her father in action when he presides over meetings, and her favourite time of day is shooting the breeze in the late afternoons over mini Tex bars that live in a designated chocolate cupboard and are offered to anyone who happens to be in his office at the time.

“I think my Dad has probably kept Tex in business for decades, because it’s a ritual, but it’s the time we laugh together and that’s also critical if you’re working as a family team. The ability to enjoy each other at work and have fun during family time is crucial to making a family business a success.”

Two sides to the story

However, there are always two sides to every story, and while it’s clear that Lew is a South African property industry lion, when it comes to his daughter he’s a pussycat and a proud papa.

“Nobody is more capable than Yael. She’s unbelievably perspicacious and a brilliant marketing talent.

“She’s also fantastic to work with because, in spite of her talent, she’s extremely humble, which makes her well-liked and respected in the office.”

Lew adds that although they naturally bump heads occasionally, conflicts are quickly resolved.

“For the most part Yael and I are on the same wavelength, which means she’s an immense source of help to me. I sound things off her all the time and best of all is that she has a memory like an elephant and she never, ever throws anything away.

“If I forget the finer details of a transaction that took place six years ago, she has instant recall and the documentation in hand five minutes later to back it up.”

Work is work and family is family

Like his daughter, Lew firmly believes that the key to a successful partnership is to remember that work is work and family is family.

“We have a strict code that we don’t talk business after hours. It is taboo and we always try to stick to it in the normal course of events.”

Does Yael have any words of wisdom for women considering becoming part of the growing family business phenomenon and working alongside their fathers?

“Each relationship is unique and fathers and daughters need to establish what works best for them, but I can’t emphasis enough how important it is to establish boundaries between home and work and to keep having fun together.

“And while you will have to prove yourself to your colleagues as well as your father, I think the best advice I can offer is the best advice my father ever gave me – be yourself, whatever the goal.”