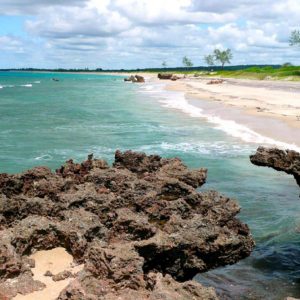 Own your very own corner of coral reef-fringed paradise

In an ever-shrinking high-tech world, it’s become more and more difficult to truly get away from it all; to even temporarily escape the frenetic global village and travel far enough off the beaten track for the ‘real world’ to fade into oblivion. There are even fewer opportunities to invest in these spaces – especially when they come fully-equipped with their own golden beaches, sea caves and a coral reef.

Sometimes Lady Luck smiles, though, and delivers a unique investment prospect such as one located along the sandy shores of Pemba in Northern Mozambique. A mere three and a half hour flight from Johannesburg lies 22 000m² of prime beachfront real estate where the baobab trees are the tallest structures to be seen for miles and the azure Indian Ocean laps against its eastern boundary. 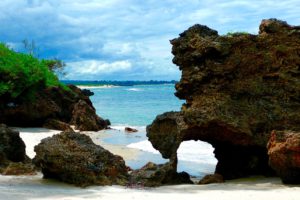 Plans for Praia Das Rochas have already been drafted, foundations partly laid and local natural materials have been sourced for a luxurious five-star lodge that optimises the spectacular location and seamlessly harmonises with the stunning natural surrounds.

Lew Geffen, Chairman of Lew Geffen Sotheby’s International Realty in South Africa, says: “At this pivotal point all the groundwork and research has been done so new owners can simply step in and instil their personal style on the project.The buyer will have full access to the approved plans by architect Ian Gray from Craft of Architecture in Cape Town as well as the relevant permits that have been granted.”

According to Gray, co-founder of COA and architect for projects like the exclusive Vamizi Private Villa Collection on Vamizi Island off Mozambique, there are few locations that live up to the perfection of this coastal strip.

“It is the epitome of tranquillity with not a soul to be seen on the beach and it’s a perfect natural playground for adults and children alike. The secluded beach is the only area along this expansive coastal stretch where the reef ends, making it both an ideal swimming beach for children as well as a diving and snorkelling paradise.

“The conditions are often perfect for surfing and kite surfing and there is almost always a breeze to cool you.”

The existing plans are for an ultra-exclusive five-unit lodge, but Gray says that there is potential for considerably more development on the site.

“The current design is for luxurious suites 25m apart that all have generous seating areas and balconies overlooking the ocean along with a communal pool and outdoor bar and entertainment area. There is also space to add amenities such as a spa or a gym.” 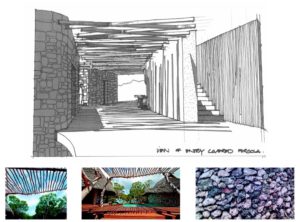 Whilst most city-dwellers dream of escaping the rat race, many would also like to know that if the need arises, civilisation and its modern essentials are not completely inaccessible.

Geffen says: “There is a new luxury resort just a short stroll along the beach where one can enjoy an evening out for dinner or drinks if cabin fever sets in or those in need of retail therapy can take a day trip into Pemba where there are markets, shops, patisseries, cafes and restaurants.

“Praia Das Rochas is also only 26km from Pemba Airport, which lies just outside the town and there are direct flights from Johannesburg daily as well as from Kenya and Tanzania.”

Traditionally known only as a remote and impossibly beautiful diving mecca, Pemba is now touted as one of the top African boom towns since a gas resource was found 65km off the Pemba coastline in the Rovuma Basin in 2012, comprising 40% of worldwide gas discoveries that year.

Says Geffen: “The town is now an important centre for northern Mozambique’s offshore natural gas fields, but still has a critical lack of accommodation for all the specialist staff who visit and work in the basin.

“Before 2012, the hotels and resorts in the region were struggling to stay afloat, but since the discovery of the gas reserves they have been almost constantly booked out by international professionals working on the gas fields and there has been a critical shortage of accommodation.”

Although Praia Das Rochas is a distance down the coastline and will remain unaffected by the growing offshore gas industry in the region, it is perfectly positioned to benefit from the ripple effect of Pemba’s strengthening position in the global spotlight.

South Africans have for many years been drawn by Mozambique’s endless stretches of unspoilt subtropical beaches, coral reefs teeming with marine life and some of the best diving and fishing in the world. But in the past decade it has increasingly become an international destination that has seen luxury adventure tourism grow rapidly with a proliferation of five-star lodges along the southern coastline.

However, the northern stretch is still very much uncharted territory and Praia Das Rochas the perfect opportunity to join the growing number of South African investors in Mozambique, which include some of the biggest names in property and development.

Geffen says: “South Africans are restricted in terms of the flow of their funds out of the country, with the current out-bound allowance being a maximum of R4 million per person per year, but the SADC property allowance that came into effect in 2010 has made investment in our neighbouring countries very appealing.

“The co-operative legislation allows individuals to invest in property in SADC member states in excess of this limit without impacting on the designation or extent of their offshore allowance and this has had a significant influence on development in countries like Mozambique in recent years.”

There are very few places on earth where scattered rock formations become gateways to slivers of paradise by allowing you to swim through small caves at high tide to access secluded little beaches; where an extensive variety of soft and hard coral attracts a legion of species including the rare 1 000kg oceanic sunfish, dolphins, whales and turtles.

Geffen concludes: “This part of the world is unlike any other; it’s unique in its wild beauty, idyllic setting and rich variety of marine life and at only $2.5 million, Praia Das Rochas is also the opportunity of a lifetime to develop a five-star, high value business.”