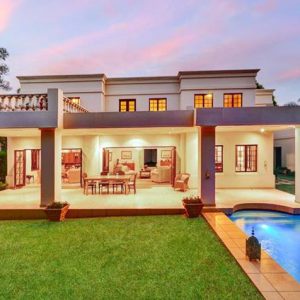 Hurlingham Manor may be a relatively new kid on the block but this upmarket enclave in the heart of Johannesburg’s most exclusive northern suburbs has become one of the area’s best kept secrets, offering not only excellent value for money but also a secure, family-oriented lifestyle in scenic surrounds.

This is according to John and Karen Bosman, Area Specialists for Lew Geffen Sotheby’s International Realty, who say they believe that with house prices starting at R2.8 million for a spacious family home, investors can buy a lot more house for their money than in many neighbouring suburbs.

“Entry-level homes at this price will have three bedrooms plus a study and three reception rooms and, while these properties often require renovation, the original properties were only built 20 to 30 years ago and modernisation need not be extensive,” say the agents.

“Mid-level homes range in price from R3.2 million to R3.8 million, and these homes are generally more modern, offering three to four bedrooms as well as staff accommodation and a pool. However, some of the bigger homes for around R3.5 million will also require some upgrading.”

The small suburb also has its fair share of top-end homes priced at R4.2 million to R5.8 million, which are spacious and modern, usually with up to four en suite bedrooms, high-end kitchens and extended entertainment areas.

The Bosmans say Hurlingham Manor also differs from its neighbours in that there are only three sectional title developments in the area with accessible entry-level prices of around R1.4 million and a maximum price of R2.5 million making them great investment opportunities for first-time buyers.

According to John Bosman, the market peaked in 2014 when 67 properties changed hands, dropping to 30 sales in 2015.

“Although stock is plentiful, we are currently finding that sellers are not being flexible and won’t budge from their asking prices, while buyers are also digging in their heels, thereby creating a stalemate which keeps properties on the market for up to four months,” he says.

“However, if a seller is serious and the house is correctly priced for the market, it will generally sell within two months.”

According to the Bosmans, the most active market segment is the R3.2 million to R3.6 million price band, while homes being sold for R4 million-plus often take several months to move.

Lew Geffen, Chairman of Lew Geffen Sotheby’s International Realty, says he believes that the situation is likely to change in the near future due to a growing demand from sellers in the Fourways area who want to move closer to the Sandton CBD to escape the growing traffic congestion and reduce commuter time.

“There are also very few vacant stands left in Hurlingham Manor, which means development is mainly restricted to renovating and upgrading existing homes to increase their value,” he says.

Hurlingham Manor’s biggest drawcard is the security that residents enjoy. The whole suburb is a gated community with only two access points and CCTV cameras at the booms which record the number plates of all vehicles entering or leaving the area. There is also an armed patrol vehicle on duty 24 hours a day.

“This peace of mind has resulted in a friendly, close-knit community where residents take to the streets to jog or walk their dogs and children can safely ride their bikes or play in the two well-maintained parks,” says Bosman.

“The high level of security has also contributed to a very active rental market in Hurlingham Manor, with corporate rentals being the order of the day.”

Hurlingham Manor’s central location is another strong drawcard as the suburb is in close proximity to many top amenities and facilities, including Sandton City, Benmore Gardens Shopping Centre and Hyde Park Centre, as well as Sandton Mediclinic and Morningside Mediclinic.

Even more conveniently, at the main entrance to the suburb, just off Republic Road, there is an office park, and a number of properties close to the boom entrance have been converted into medical suites and a dental practice.

Several prestigious schools are within easy reach of Hurlingham Manor, say the agents. St Stithians has a private entrance within the suburb, and this is one of the main reasons why Hurlingham Manor is so sought after. Other schools within close proximity are Crawford College, Montrose Primary School and Bryaneven primary.