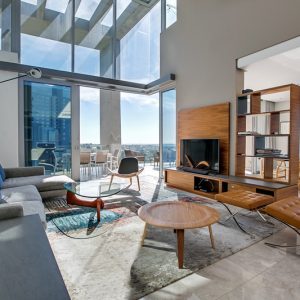 Who is paying R170 000 p/m to rent these luxury homes, asks Financial Mail

SA’s uber wealthy suburbs are testing new rental highs but an oversupply of luxury homes is starting to flood the market.

It is no longer unheard of for the well-heeled to fork out R100,000/month or more to secure a trophy rental home in SA’s poshest neighbourhoods.

At Johannesburg’s The Houghton, a swanky sectional title development overlooking the Houghton golf course, a foreign company is paying R100,000/month to rent a four-bedroom apartment for one of its executives.

Even KwaZulu Natal, which may traditionally have lagged Gauteng and the Western Cape, is testing new rental highs at sought-after gated estates such as Zimbali Coastal Resort, Mount Edgecombe, Simbithi Eco Estate and Dunkirk Estate. In the year to date, Seeff has let out three villas at Zimbali for R100,000/month, R85,000/month and R65,000/month.

On Cape Town’s Atlantic Seaboard, SA’s most renowned playground of the rich and famous, monthly rentals of up to R170,000/month have recently been achieved. In Cape Town’s southern suburbs of Bishopscourt and Constantia, Pam Golding Properties have fetched monthly rentals of between R55,000 and R105,000 for a number of super luxury abodes with all the bells and whistles.

Industry players say demand for upper-end rental properties in Cape Town is being driven primarily by “semigrants” from upcountry areas. This has also brought more upper-end homes in Pretoria and Johannesburg onto the market, as owners who move to the Cape battle to sell their properties and let them out instead.

Shaun Groves, Gauteng rental manager for Lew Geffen Sotheby’s International Realty, says a number of properties valued at R20m-R30m have recently come onto the Gauteng market at monthly asking rentals of typically R65,000-R100,000. “The owners have bought elsewhere, are emigrating or are moving to the Western Cape,” he says.

Groves notes that while rentals of R100,000/month may seem exorbitant, it is only a third of what the monthly bond repayment on the R30m property would be. In addition, tenants are not responsible for additional costs such as rates and taxes.

Though there is still demand for rental houses in Gauteng’s gated estates in the R30,000/month and upwards bracket, particularly among foreign corporates, Groves says there is now a “dramatic” oversupply of luxury, sectional title apartments in the Sandton CBD, as a lot of new stock has been developed in recent years.

“In many cases, landlords are having to accept lesser-priced rentals than they did last year,” he says.

Similarly, an oversupply of upmarket rental stock is starting to emerge in some Cape Town areas, despite the Mother City generally still experiencing stronger rental demand and growth than other SA cities. In fact, Cape Town now leads Knight Frank’s global rental rankings, with prime rentals rising by 5.9% in the year ending March.

The index tracks rental growth in the top 5% of the housing market in 17 cities across the globe.

“We are now marketing nearly 70 rental properties, which is the most stock we’ve had at any one time in more than three years. Most of the properties are sitting on the market because there is so much on offer and landlords are not willing to negotiate,” says Lorraine Delbridge, rental agent for Lew Geffen Sotheby’s International Realty in Cape Town’s southern suburbs.

Delbridge says that among the properties that are proving hard to let is a house in Hout Bay with a price tag of R150,000/month, as well as one in Upper Claremont and another in Steenberg Golf Estate, both at R90,000/month.

An oversupply of rental stock has even developed in the previously undersupplied Atlantic seaboard, says Lew Geffen Sotheby’s International Realty’s Lisa Hendricks. “I believe the popularity of Airbnb may have given landlords unrealistic expectations of what returns they can get on long-term rental properties, especially in the winter months,” she says. She believes the market has become overpriced.

For the complete story and other top business insights, read Financial Mail’s stories on BusinessLive here